He was a young Soviet Yiddish prose writer, journalist, and editor, born in Belz (Bălți), Moldova. In 1975 he graduated from the Kishinev Conservatory and worked as a violinist in the Moldavian Symphony Orchestra. In 1983 he completed his studies in the Yiddish division of the “Senior Literary Course” at the Maxim Gorky Literature Institute in Moscow. He began publishing stories in Sovetish heymland (Soviet homeland) in Moscow in 1981; he later became a member of the editorial board of the journal. In 1989 he created for Moldavian national television a Yiddish program “Af der yidisher gas” (On the Yiddish street) and directed it. He produced two film scenarios: “Gib zikh nit unter, yidish” (Don’t surrender, Yiddish) (1991) and “Vu iz mayn heym?” (Where’s my home?) (1992)—on the fate of Bessarabian Jews. From 1990 until he made aliya in 1992, he was editor of the bilingual newspaper Undzer kol (Our voice) in Kishinev. He also wrote stories and novels and was a member of the writers’ association of Moldova and the Soviet Union. In 1986 his first work appeared: Treplekh aroyf tsu a nes, dertseylungen un noveln (Steps to a miracle, stories and novellas) (Moscow: Sovetski pisatel), 259 pp.; in Russian, Stupeni k chudy, povesti, rasskazy (Steps to a miracle, stories, tales) (Moscow: Sovetskii pisatel', 1988), 318 pp. In Jerusalem, where he was living, he brought out a children’s magazine in Yiddish entitled Kind-un-keyt (Young and old). He also served as an administrator for Leivick Publishers. From 1998 he was living in New York, and from May 1999 he was editor-in-chief of Forverts (Forward). From 2007 he was editing the journal Di tsukunft (The future) with Gennady Estraikh. His works appeared in: Afn shvel (At the threshold) in Moscow; Yugntruf (Call to youth), Yidishe kultur (Jewish culture), and Forverts in New York; Yerusholaimer almanakh (Jerusalem almanac), Lebns-fragn (Life issues), Letste neyes (Latest news), and Naye tsaytung (New newspaper) in Israel; Di pen (The pen) in Oxford; and in the quarterly Toplpunkt (Colon) in Tel Aviv. His book-length works have been translated into other languages. He is a member of the Yiddish writers and journalists in Israel. He was awarded the Yankev Fikhman Prize in Israel (2002), the Dovid Hofshteyn Prize in Israel (2005), and other prestigious awards for literature. 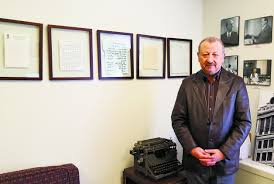