MORTKHE (MAX) SABOLTSHI (MIKSA SZABOLCSI) (August 27, 1857-June 17, 1915)
He was born in the village of Nyírtura, Komitat Szabolcs, Hungary.  He studied in Hungarian yeshivas and in the Budapest rabbinical seminary.  He excelled particularly at the time of the Tiszaeszlár (Tisza-Eslar) blood libel with his vigorous fight in the press against the blood accusations.  The widow of Meyer Rayz then invited him to serve as editor of Yidishe pester tsaytung (Jewish newspaper of Pest), which in 1887 united with the competing newspaper of Moyshe Ehrenteyl—Naye yidishe pester tsaytung (New Jewish newspaper of Pest).  From 1886 he was also editor of the religious magazine Egyenlőség (Equality), which fought against Zionism and nationalism.[1]  He translated into Hungarian Heinrich Graetz’s history of the Jews, the parts on homiletics and on tractate Sanhedrin of the Talmud.  He wrote in Hungarian stories of Hassidic life.  He published descriptions of his travels through the land of Israel, Italy, and Germany.  He translated into Hungarian stories and poems by Mendel Moykher-Sforim, Sholem-Aleykhem, Sholem Asch, Yehuda Leib Gordin, and Ḥaim Nachman Bialik.  Using the pen name “Ivri anokhi” (I am a Jew), he also contributed to Hebrew-language periodicals. 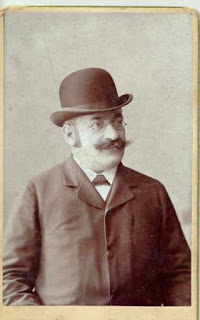 [1] Translator’s note.  Some sources indicate an early support on his part for Zionism. (JAF)
Posted by Joshua Fogel at 03:49