DER NISTER (November 1, 1884-June 4, 1950)
The pseudonym of Pinkhes (Pinye) Kahanovitsh (Kaganovitsh), he was born in Berdichev, Ukraine.  On one side he descended from scholars and mystics, and on the other side from simple village Jews, toilers.  He studied in religious primary school and in synagogue study hall.  He was under the firm influences of Hassidism and later became a teacher of Hebrew.  He lived for twelve years under a foreign name (he was “unregistered”), and because of this suffered greatly (perhaps because of this he assumed the name “Der Nister” [the hidden one]?).  He began writing early in life.  He debuted in print in 1907 with a short volume entitled Gedankn un motivn, lider in proze (Ideas and motifs, prose poems), which drew to this beginner the “attention in literary circles of this original, though immature, style and daring quality of the motifs” (Zalmen Reyzen).  He later published a series of fictional works in: Literarishe monatshriftn (Literary monthly writings) (Vilna, 1908); G. Gorelik’s Der idisher almanakh (The Jewish almanac) (Kiev, 1909); and Y. L. Perets’s anthology Yudish (Yiddish) (Warsaw, 1910); among others.  At that time he also published two other books, Hekher fun der erd (Higher than the Earth) (Warsaw, 1910) and Gezang un gebet (Song and prayer) (Kiev, 1912), in which the author expressed the intention to introduce into Yiddish fiction parts of Jewish mysticism. 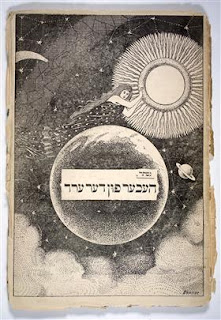 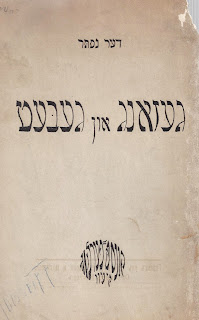 During the time known as his “Kiev period,” Der Nister was particularly prolific, when (after Dovid Bergelson) he was the most important representative of Yiddish prose in Ukraine.  He contributed to a variety of literary publications at that time, such as the anthologies Eygens (One’s own) and Oyfgang (Arise).  Around 1920 he was living in Moscow, and he spent a certain period of time in the exemplary Jewish children’s colony of Malakhovke (Malakhovka), near Moscow.  He then left Russia, lived in Berlin and Hamburg, published a series of new pieces in: Shtrom (Current) in Moscow; Dorem-afrike (South Africa) in Johannesburg; Sambatyon (Sambation) in Riga; Milgroym (Pomegranate) in Berlin; and Zhitlovsky’s Dos naye lebn (The new life) in New York.  Together with Moyshe Lifshits (Livshits) and Leyb Kvitko, he compiled the collection Geyendik (Going), published by the Jewish Section of the Commissariat for the People’s Education (Moscow, 1923), 71 pp.  A collection of his writings in two volumes, entitled Gedakht (Imagined), was published at this time in Berlin.  In 1928 he returned to the Soviet Union—with L. Kvitko, D. Bergelson, Perets Markish, and others who had spent a bit of time abroad.  From that point in time, Der Nister published numerous significant works, of which Di mishpokhe mashber (The family Mashber) later became a foundational work in Yiddish literature. 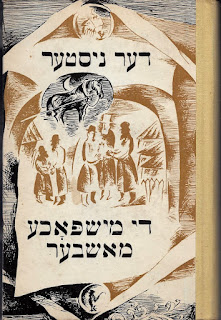 He wanted to go further and dig into the treasure of the heritage, such as Perets, Berditshevski, Yude Shteynberg, and others.  They opened for the Yiddish word the sources of Hassidism.  He conjured and bewitched the secrets and allusions of Kabbalistic mysticism.  He saturated his “motifs,” images, and stories with the symbolism and perennial language of the Zohar [central text of Kabbalah] and similar religious texts….  He sought the naïveté of folk creation to unify the wisdom of the kabbalists and his own wisdom….  Unlike Y. L. Perets, he did not make stories out of Hassidic or simple folktales, but just the opposite—he recounted semi-realistic tales so that they became stories, legends, tales of wonder….  His ambition was to be our generation’s Rabbi Nakhmen of Bratslov [the Braslaver Rebbe]….  The difference between Der Nister’s earlier stories and Der mishpokhe mashber lies primarily in that each of them was a sequel to Rabbi Nakhmen’s fantastic imagination, while the family chronicle often reads to us as a transformation of the same Rabbi Nakhmen’s semi-realistic stories.  It was not for no reason that the Braslaver Hassidim occupy such a major place in this book.  Nor is it for no reason that they fill their material needs and spiritual comfort, their torn clothing and full hearts.  And not only for them in Di mishpokhe mashber, but for their Rabbi Nakhmen as well.  He is there, too.  He lives in Der Nister himself.  He assists him in being the sole Soviet writer who blessed the old (Braslaver) Jewishness, although he came (in the foreword and in the first chapter) to condemn him.  To be sure, the Soviet Der Nister could not bless poor Hassidic people, without condemning Hassidic and other rich men.  He can do no better than show us the moral wealth of the joyous paupers, where he should not portray, in contrast, the spiritual poverty of the gray and despondent rich.  Without this bit of “class struggle,” it would be difficult for him to render his historical novel an expression of “socialist realism.”  Behind the material “poor and rich,” however, there hides for Der Nister, as is always so, a spiritual “poor and rich,” and he does not idealize “poor” in general; he paints with quiet sympathy only those often willingly poor folk who are rich in spirit, in wisdom, or in fantasy.  He placed the Braslaver Hassidim higher than all the other Berdichevers—the “one and one-half or two quorums of craftsmen and mainly paupers” not because they were craftsmen or paupers (he already had enough poor people who were part of the Berdichev underworld), but because they consented, as he expressed it himself, “there was nothing whatsoever like them” (p. 87) and they were like nothing else—not as the average “proletarian writer” would consider it his duty to speak—because they were fooled, embittered, and enslaved more than all the others—and therefore because both the rich and the poor who listen to their environs excelled to no end in humanity, courtesy, and friendship.

The new elements of style which largely distinguish the novel Fun finftn yor from Der mishpokhe mashber do not signify that the author has digressed from his earlier artistic style.  The theme and the idea of the work necessitated for him a new lexicon and a new descriptive method.  In Der mishpokhe mashber the author adhered to the well-known method of “paint, painter, and be quiet,” all the time being certain that the tendency would grow out of the tried and true painting itself—that is, from the internal logic of destiny itself.  In his work Fun finftn yor, Der Nister appears as an active and immediate participant in the events.  He is passionate, militant.  In the replicas, journalistic deviations, and characteristics of the images, the ideological positions of the author are emphasized, as are his links to the “historical process.”….All the components of the novel, the composition, action, and authorial deliberation are subject to the humanistic and social ideas of the author….  The novel Fun finftn yor is more than a literary-artistic monument which has miraculously survived.  This is an important historical and human document….  The novel Fun finftn yor shines a light back retrospectively on his [Der Nister’s] entire creative path and helps elucidate his innovative and complex artistic way. 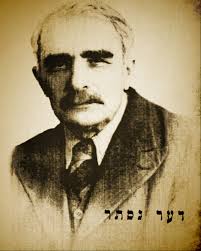