SHLOYME-MIKHL NEKHES (SHLOMO MICHAL NECHAS, SOLOMON MICHAEL NECHES) (October 10, 1891-February 11, 1954)
He was born in Jerusalem, into a rabbinical family, a descendant of the Vilna Gaon.  He attended Jerusalem yeshivas and received ordination into the rabbinate.  In 1910 he moved to the United States.  He served as a rabbi and preacher in New York, Pittsburgh, Columbus (Ohio), and elsewhere.  From 1924 he was living in Los Angeles.  He studied law and received his doctoral degree from the University of California.  He was a member of the main leadership of the Association of Rabbis in America and dean of the Western division of the “Jewish Institute.”  He authored religious texts and secular books.  In Hebrew: Shemen turak (Ointment poured forth) (St. Petersburg, 1916), 87 pp.; Shemen rosh (Choice oil) (Los Angeles, 1947), 206 pp.; Torato shel shem (God’s law) (Jerusalem, 1930), 212 pp.; Vayered miyaakov (And out of Jacob) (Los Angeles, 1948/1949), 166 pp.; and Moshe vehaavot (Moses and the forefathers) (Los Angeles, 1951), 61 pp.; among other others.  In English: “As ‘Twas Told to Me”: A Hundred Little Stories of the Old Rabbis (Los Angeles, 1926), 100 pp.  In Yiddish: A mayse noyre fun an agune, velkhe der barimter goen harov meyer abulafye z”l hot mater geven (An extraordinary event from a deserted wife, which the famed sage, Rabbi Meir Abulafia, may his memory be for a blessing, authorized) (Los Angeles, 1944/1945), 12 pp.  He contributed to: Otsar yisrael-entsiklopediya (Treasury of Israel encyclopedia) and Yidish-englisher entsiklopedye (Yiddish-English encyclopedia), among other such works.  He published articles on education and the settlement in the land of Israel in: Yidishes tageblat (Jewish daily newspaper) and Morgn-zhurnal (Morning journal) in New York; Kalifornyer yidishe shtime (Jewish voice of California) in Los Angeles; and elsewhere.  He died in Los Angeles. 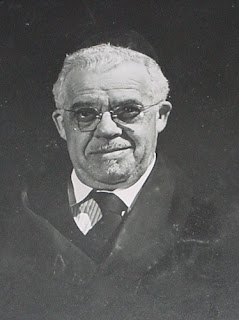