MORTKHE NEMIROVSKI (MORDECHAI NAMIR) (February 23, 1897-February 22, 1975)
He was born in Nemyriv, near Kherson, Ukraine.  He studied in religious elementary school, the Lida yeshiva, and later in a high school and an agronomical school in Kherson.  He subsequently studied law and economics at Kiev University.  He attended as well the local conservatory.  From his youth he was involved in the Zionist socialist movement.  He was a member of the central committee of the Tseire-Tsiyon (Young Zionists) organization in Russia.  During the pogroms in Ukraine (1920), he was a member of the self-defense in the Jewish colonies.  In 1924 he left Russia and immigrated to the land of Israel.  His first years there, he worked as a woodcutter in the workers’ bakery in Tel Aviv and was secretary of the “Aḥdut haavoda” (Unity of labor) group.  In 1936 he was secretary of the labor council of Tel Aviv, and later for many years a member of the local city council.  From 1939 he was a member of the main leadership of Mapai (Workers’ Party in the Land of Israel) and of Histadrut Haovdim (Federation of Labor) in the land of Israel, and he was director of its statistical division.  He was as well a member of the main command of Haganah.  He was arrested in 1940 by the English and imprisoned in Jaffa and Akko.  He served as a Mapai delegate to Zionist congresses and international labor conferences.  In 1947 he visited Poland and the Holocaust survivors’ camps in Germany, where he appeared in public to give speeches in Yiddish on behalf of “Iḥud olami” (World union).  Following the rise of the state of Israel in 1948, he assumed important positions.  He was ambassador to Moscow (1949-1950).  He was general secretary of Histadrut (1951) and later for a time Labor Minister in the government of the state of Israel.  He published articles on scholarly issues and the labor movement in: Bafrayung (Liberation) and other periodical publications in Russia; Bafrayung-arbeter-shtime (Liberation-voice of labor), Frayhayt (Freedom), Dos vort (The word), and Haḥaluts (The pioneer)—in Warsaw; Folk un land (People and nation) and Dos fraye vort (The free word) in Lemberg; Unzer vort (Our word) in Lodz; Bafrayung in Munich; and Dos vort in Paris; among others.  His first work in Hebrew was a series of articles on the condition of Jews in the United States for Kuntres (Pamphlet) in Tel Aviv (1926-1927), and later in Davar (Word) and elsewhere.  In Yivo-bleter (Pages from YIVO) (Vilna) 5 (1933), pp. 264-94, he published “Yidishe arbeter, ongeshtelte un baamte in e״y un zeyer organizatsye” (Jewish laborers, employees, and civil officials in the land of Israel and their organization); it was published in book form under the title Di yidishe organizirte arbeter-bavegung in erets-yisroel (The Jewish organized labor movement in the land of Israel) (Warsaw, 1933), 32 pp.  He was the author of Dray yor in lebn fun der histadrut, 1951-1953 (Three years in the life of Histadrut, 1951-1953) (Tel Aviv, 1953), 80 pp. and of the pamphlets: Hataasiya utenae haavoda baarets (Industry and conditions of labor in the land) (Tel Aviv, 1931), 32 pp.; Hamatsav hakalkali beerets yisrael lereshit 1932 (The economic situation in the land of Israel at the start of 1932) (Tel Aviv, 1932), 107 pp.; Hamatsav hakalkali beerets yisrael besof shenat trts״g (The economic situation in the land of Israel at the end of the year 1932/1933) (Tel Aviv, 1933), 266 pp.; Shenatayim beḥaye hahistadrut, 1951-1952 (Two years in the life of Histadrut, 1951-1952) (Tel Aviv, 1953), 133 pp.; and a memoir, Sheliḥut bemoskva (Assignment Moscow) (Tel Aviv: Am oved, 1971), 392 pp.  He was editor of Hapoel baḥarshet (Industrial labor) and other periodical publications of Mapai and Histadrut in the state of Israel.  He was mayor of Tel Aviv, 1959-1969.  He died there. 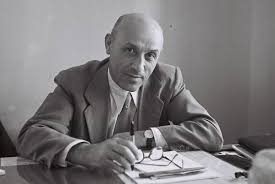