HERMAN (YOYEL) SOLNIK (February 25, 1869-1943)
He was born in Blashki (Błaszki), Kalish (Kalisz) district, Poland.  Until age twenty he studied in synagogue study hall and later, under the influence of the Jewish Enlightenment, he took up a secular education and studied foreign languages.  For many years he worked as a private tutor, later as an “advocate” he ran an office that wrote requests to the authorities.  In August 1914, when the Germans carried out a massacre of residents of Kalisz, he fled to Lodz and lived there until the end of the war.  He subsequently returned to Kalisz, where he was a prominent community leader; he was a Zionist councilor on the city council and a member of the Jewish community administration.  He began his writing activities with a poem “Yerusholayim” (Jerusalem) which appeared in Der yidisher historiker (The Jewish historian) in London (1890), later publishing poems, feature pieces, stories, and articles in: Der veg (The path), Unzer leben (Our life), Di naye velt (The new world), Roman-tsaytung (Fiction newspaper), and Der shtrahl (The beam [of light]), among others, in Warsaw; in Hebrew in Hashavua (The week) in Cracow; and Dr. Grünwald’s Jüdische Bibliotek (Jewish library) in Cracow-Vienna (1909); among others.  He also contributed pieces to: Lodzer tageblat (Lodz daily newspaper), Folksblat (People’s newspaper), and Di yetstige tsayt (Contemporary times) (four issues, Lodz, for which he served as editor).  He served as editor of the weekly Kalisher blat (Kalisz newspaper) (1922-1936), and placed work in Kalisher tog (Kalisz day) and Dos kalisher vort (The Kalisz word), among others.  In book form: Fun himel un erd (From heaven and earth), poetry collection (Warsaw: Kultur, 1912), 44 pp.; Fun altn kloyster, legendn un dertseylungen (From an old church, legends and stories) (Warsaw: B. Kletskin, 1932), 119 pp.  He also published under such pseudonyms as: Dr. Malakhi, Amicus, and Hesol.  During WWII, he was confined in the Kalisz ghetto and later the Lodz ghetto, from whence he was taken to Auschwitz and murdered there.[1] 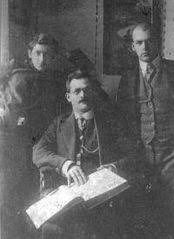 [1] Translator’s note. According the Polish Wikipedia entry for Solnik, he died in the Warsaw Ghetto. (JAF)
Posted by Joshua Fogel at 12:42