YOYSEF LURYA (YOSEF LURIA) (1871-December 3, 1937)
He was born in Pumpian (Pumpenai), Kovno district, Lithuania.  He was raised in Romny, Ukraine, where he graduated from a senior high school.  He went on to study history and philosophy at the University of Berlin and received his doctoral degree in Berne, Switzerland.  In Berlin he was involved in Zionist student circles, to which also belonged the subsequently famous Leon Motskin, Shmarye Levin, Bertold Fayvl, Isidor Elyashev (Bal-Makhshoves), and others.  After completing his studies abroad, Lurya settled in Warsaw, where he opened a “cheder metukan” (improved religious elementary school) under the name “Ḥinukh” (Education) which was a model for other schools.  In November 1899 the Warsaw Hebrew published Aḥiasef entrusted to Lurya with the editorship of its biweekly newspaper Der yud (The Jew), which the publisher had been publishing since the beginning of 1899 under the editorship of Y. Ravnitski.  With its new editorial board, the newspaper now began to publish weekly.  Lurya attracted to the new weekly the best Yiddish writers of that era (Mendele Moykher-Sforim, Sholem-Aleykhem, Y. L. Perets, Avrom Reyzen, Sholem Asch, H. D. Nomberg, Bal-Makhshoves, Moyshe-Leyb Lilienblum, Morris Rozenfeld, and others) and elevated the newspaper to such a literary height that no other publication in Yiddish had until then achieved.  Der yud was an epoch in the development of the Yiddish press and literature.  It was a Zionist paper, but without partisan narrow-mindedness.  At the beginning of 1902 the newspaper began to published a monthly journal for literature, criticism, and popular science, entitled Di yudishe familye (The Jewish family), and also an inexpensive popular edition of Der yud.  (Der yud was published in Cracow, although the editorial board of the newspaper was located in Warsaw, because it was easier in Cracow to receive permission for a newspaper in Yiddish.)  In early 1903 he was invited to St. Petersburg to help edit Fraynd (Friend), the first Yiddish-language, daily newspaper in Russia.  Having become the owner of Der yud at the end of 1902, Lurya sold both publications—Der yud and Di yudishe familye—and set off for St. Petersburg to help edit Fraynd.  He worked there for about four years, writing articles mainly about foreign politics and serving as editor of the literary section of the paper.  He was a devoted Zionist, and under his influence the newspaper was for the first four years Zionist, but in his ties to Yiddish he parted ways with his Hebraist comrades, and his series of articles, entitled “Yidish un ir natsyonaler vert” (Yiddish and its national worth) in Fraynd (1906), engendered a fierce polemic in the Yiddish and Hebrew press.  “In zhargon [Yiddish],” wrote Lurya, “the Jewish people invested a piece of their soul.  It is not meaningless for the people to consider this as their language, to love it, and to take umbrage when intellectuals, both genuine and false ones, are embarrassed by it and shun it.”  In the spring of 1906, he left Fraynd and became editor of the Zionist weekly Dos yudishe folk (The Jewish people) in Vilna.  He led this newspaper in the same spirit and direction as he had with Der yud, and this brought him into conflict with the Zionist party, and the program of his newspaper (and hence the “Jewish people”) was received with considerable dissatisfaction by the Russian Zionists at the congress of The Hague.  It was suggested to Lurya that he initiate certain changes in the direction of his newspaper, but he rejected this.  He resigned his position and in 1907 left for Israel.  From 1908 he sent letters from the land of Israel to the Zionist press, still writing in Yiddish, contributed impressions of Israel to Fraynd (1909), and published in M. Shalit’s anthology Folk un land (People and land) (1910) his article on the Arab issue which aroused a storm among the Zionists.  He later was completely cut off from Yiddish literature and the press and wrote solely in Hebrew—in Haolam (The world) and elsewhere.  He devoted all of his energies to Hebrew educational work, initially as a teacher in the “Herzliya” high school in Tel Aviv and later as the leader of the Hebrew Vaad haḥinukh (Educational council).  He subsequently became chairman of teachers’ union, and in the last years of his life he served as director of the education department of Vaad Leumi (National Council).  Over the years 1918-1922, he served on the editorial board of the daily newspaper Haarets (The land).  In a separate publication he brought out: Der tsienistisher kongres tsum ershtn mol (The Zionist Congress the first time) (Warsaw).  He died in Jerusalem. 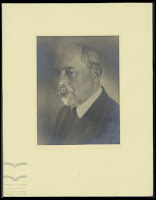