YITSKHOK LIBMAN (October 27, 1900-November 8, 1959)
He was born in Petrikov, Minsk district, Byelorussia.  He studied in religious elementary school, yeshiva, and later turned his attention to secular education.  In 1918 he made his way via Siberia and Japan to the United States, settled in New York, studied at the Jewish teachers’ seminary, and for a time took up teaching Hebrew and Yiddish.  He was politically active with the left wing of the Labor Zionists.  He began writing around 1920, published articles in Tog (Day) and Idisher kemfer (Jewish fighter), and wrote poetry and articles (using as well the pen names Y. L. Idelman and Itshe) for: Di tsayt (The times), Fraye arbeter shtime (Free voice of labor), and Groyse kundes (Great prankster), among other serials.  Together with B. Fridman and M. Kravits, in January 1923 he began publishing in New York Oyfgang (Arise), “monthly journal for all manner of literary creation.”  In 1926 he founded and edited Undzer bukh (Our book), “bimonthly journal of literature and criticism.”  In 1935 Libman founded Nyu yorker vokhnblat (New York weekly newspaper), of which he alone was publisher and editor over the course of twenty-five years.  It later came out monthly, and he published in it articles and poetry.  From his contributors and supporters, Libman established a circle called “Lovers of Yiddish,” and he frequently published in the newspaper the works of new writers.  In book form, he wrote: Der fertsnter, herman gold (The fourteenth, Herman Gold), “from the series: quiet Jewish writers” (New York: Vokhnblat, 1944), 32 pp.; Varyatsyes (Variations), selected poems, beautifully produced in album format, with printed headings and drawing by the author (New York: Vokhnblat, 1944), 32 pp.; Afn sheydveg (At the crossroads) (New York, 1945), 15 pp.; Sidni hilman, 1887-1946 (Sidney Hillman, 1887-1946) (New York: Vokhnblat, 1946), 32 pp.; Tsum gevisn fun der velt (To the conscience of the world) (New York, 1946), 16 pp.; In likht fun tsayt (In light of the times), essays (New York, 1953), 222 pp.; In gang tsum folk (En route to the people), poetry (New Yor, 1953), 126 pp.; Boyer un shafer fun mayn dor (Builders and creators of my generation), essays and assessments of writers and community leaders, vol. 1 (New York, 1943), 222 pp., vol. 2 (New York, 1955), 192 pp.  Libman was involved in publishing activities and brought out L. Shapiro’s Di yidishe melukhe (The Jewish state) and Herman Gold’s children’s stories.  In 1952 there was established in New York a Libman Branch of the Jewish National Labor Alliance.  He died in Maimonides Hospital in Brooklyn, New York.  On the thirtieth-day commemoration following his death, a special issue of Nyu yorker vokhnblat (December 15, 1959) appeared, and it was dedicated to the memory of the recently deceased.  A similar issue was published on the first anniversary of his passing (November 1960).  After Libman’s death, Nyu yorker vokhnblat was published under the editorship of Mortkhe Yardeni, and after a short time the serial was discontinued with the last issue (no. 540). 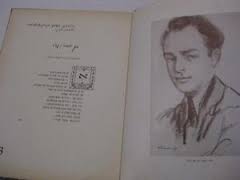