He was a bibliographer, current events author, historian, and community leader, born in the town of Starokonstantinov (Starokostyantyniv), Volhynia, Ukraine. His father Yisroel was an office employee who did everything to give his children an education, but theirs was a very difficult life materially. Yoysef initially studied in religious primary school and general subject matter privately; he later studied in a Russian high school in Kiev, where he excelled for his knowledge and extraordinary memory. At age fifteen (1913), he was forced to support himself, and he found work in the Demievko (now, Kiev) Library. After the February Revolution in 1917, he sat for examinations as an external student for the eighth class in Kiev and continued into the historical and philological faculty of Kiev University. At this time he was politically close to the left Labor Zionists, but after the October Revolution, he joined the Communist Party. He interrupted his university education and volunteered to join the Red Army. He debuted in print as a journalist in 1918-1919, and wrote in three languages: Yiddish, Ukrainian, and Russian. In 1922 he was appointed as a lecturer at the higher military-political course of study run by the central committee of the Communist Party of Ukraine. He was demobilized from the Red Army in 1924 when the civil war came to an end, and he was then sent to Berdichev to engage in Party work; there he ran the Ukrainian and Yiddish press. In 1919 his first bibliographic work, Reshime fun der yidisher prese in ukraine in der tsayt fun der revolutsye, februar 1917-februar 1919 (Listing of the Yiddish press in Ukraine in the time of the Revolution, February 1917-February 1919), was published in the Kiev journal Bikher-velt (Book world). Over the years 1922-1925, he completed his studies at Kiev University and prepared to publish a book on the French Revolution. In 1922 he was appointed a lecturer of history at the Kiev Institute for Economics; he was also in charge of the subject “History of the Western European Revolutionary Movement” at the Kiev senior high school. In 1925 he was officially named as professor of Western European history. Over the years 1924-1927, he went several times on scholarly missions to Germany and the Baltic states. He was appointed professor and director of the recently established Department of Jewish Culture (later, the Institute for Jewish Culture) at the Ukrainian Academy of Sciences. At the same time, his scholarly work was interrupted when the Soviet government named him to a position on the organizing committee of the Jewish Autonomous Region of Birobidzhan. In October 1934 he was elected a corresponding member of the All-Ukrainian Academy of Sciences, but he left for Birobidzhan. Soon, though, there commenced in Moscow the trial of members of the “Trotsky-Zinoviev bloc.” In Kiev it was pointed out that, shortly after Lenin’s death, when a sharp factional struggle broke out in the Party, Liberberg had taken an anti-Stalinist position—and what’s more, that he was “number two,” according to the hierarchy of the leaders of the Trotskyist opposition in Ukraine. In July 1936 he was arrested, and on March 9, 1937 the Khabarovsk military tribunal handed down a death sentence for him. 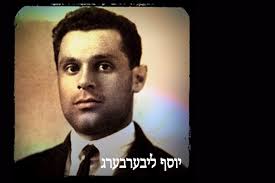