MOYSHE SHOR (April 11, 1872-September 28, 1949)
He was a playwright, born in Galats (Galați), Romania, into a rabbinical family.  He attended religious elementary school and an Odessa yeshiva.  In 1891 he arrived in Lemberg.  On the advice of Avrom Goldfaden, he became a prompter and later an actor in Gimpel’s theater.  He organized his own acting troupe and traveled around Galicia, Bukovina, Romania, and a short time in Moravia and Berlin.  In 1905 he arrived in the United States, where he was active as an actor and theatrical director in Baltimore, Detroit, and Philadelphia.  He was one of the founders and contributors to the first Yiddish daily newspaper in Galicia, Lemberger tageblat (Lemberg daily newspaper) (1908), and in it he published a series of poems.  Later, from time to time, he published sketches and humorous pieces in Chicago’s Idisher kuryer (Jewish courier) and Idisher rekord (Jewish record).  He mainly became popular as a translator and writer of a great number of plays which excelled in their pure Yiddish, vivid dialogue, and fine couplets.  The best actors of that era appeared in his plays.  Shor’s operetta Di rumenishe khasene (The Romanian wedding), with music by Perets Sandler (1915), became a masterpiece on every Yiddish stage.  It played 500 times in Warsaw with Boaz Young in 1925-1926.  In 1960 and 1974, the operetta was staged in Israel. 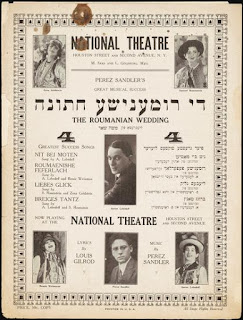