BORIS SHATS (SCHATZ) (December 4, 1866-March 23, 1932)
He was a sculptor, born in Vorne (Varniai), Lithuania—with the Jewish first name of Zalmen-Dov.  In the land of Israel, he Hebraized his name to Barukh Sh”ts.  He was the founder of the art school Bezalel in Jerusalem, where he moved in 1906.  He wrote articles in Russian, Bulgarian, Hebrew, and Yiddish on art, especially on Bezalel.  He published the pamphlet Betsalel (Bezalel) (Odessa: Tsienistishe kopike-biblyotek, 1909/1910), 43 pp.  His Yerushalaim habenuya (Jerusalem built) (Jerusalem, 1924), 190 pp., was published in its Yiddish original in 1925 as Di geboyte yerusholayim, a kholem afn vohr (Jerusalem built, a dream in reality) (New York: Hebrew Publishing Co.), 215 pp.  He died in Denver, Colorado. 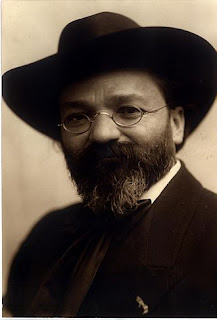