KHAYIM-NAKHMEN SHAPIRO (1895-December 8, 1943)
He was a Hebrew literary historian, born in Minsk.  He was the son of the last Kovno rabbi, R. Avrom-Duber Shapiro.  He attended religious elementary school and yeshivas.  He studied philosophy and Semitic philology in Berlin and Vienna, where in 1925 he received his doctoral degree.  He was lecturer (1925-1930) and from 1931 a professor of Semitic languages at Kovno University.  He was also a leading Zionist in Lithuania.  During WWII he was in charge of illegal cultural and educational work in the Kovno ghetto.  He wrote mainly in Hebrew.  He wrote stories, journalistic articles, and research pieces—mainly in Gilyonot (Tablets), Haolam (The world) and Moznaim (Scales)—but he was principally concerned with his comprehensive book, Toldot hasifrut haivrit haḥadasha (History of modern Hebrew literature), planned to be 12 volumes but only volume 1 appeared (Tel Aviv, 1939), 582 pp.  The second volume was prepared for the published but was lost in the ghetto.  In Yiddish he wrote mainly for the Kovno daily newspaper Idishe shtime (Jewish voice)—on literary and Zionist topics.  A longer work, entitled “Der vezentlekher untersheyd tsvishn der alter and nayer literatur” (The essential difference between ancient and modern literature), published in the collection Gedanken un lebn (Ideas and life) (Kovno, 1935), pp. 27-47.  In book form in Yiddish: Der algemeyner tsienist (The general Zionist) (Kovno, 1936), 171 pp.  He died in the Kovno ghetto. 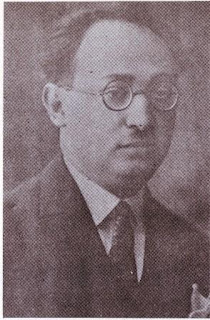 
(Translator's note. For more information on his life and work, see: https://library.osu.edu/projects/hebrew-lexicon/02204.php)