YOYSEF RUMSHINSKI (JOSEPH RUMSHINSKY) (June 15, 1881-February 6, 1956)
He was a typesetter and theatrical showman, born in Vilna.  His father was the well-known preacher Khayim Rumshisker.  He studied in religious primary school and at a very young age, in 1889, entered Treskin music school in Vilna.  He traveled with celebrated cantors and later with Yiddish theatrical troupes through Russia.  In 1904 he came to the United States, and there he composed a great number of musical works for the Yiddish stage.  Many of his melodies became popular songs, among them: “Vyiten lekho” (And He will give), “Mir veln tantsn” (We’re going to dance), “Gute nakht” (Good night), “Shlof mayn kind” (Sleep, my child), “Bay di tanoim aza simkhe” (Joyous as an engagement party), “Fun keyver biz tsum grub” (From the grave to the pit), “Ikh bring aykh a grus fun der heym” (I bring you greetings from home), “Der kidesh” (The benediction), and “Shma yisroel” (Hear, O Israel).  He wrote numerous articles for Forverts (Forward) and later for tog (Day).  In particular, his memoirs concerning Yiddish theater appeared in book form under the title Klangen fun mayn lebn (Sounds from my life) (New York: A. Y. Biderman, 1944), 832 pp.  There is also his Dos rumshinski bukh, aroysgegeben likhvoyd zeyn 50ten geburtstog (The Rumshinski book, published for his fiftieth birthday) (New York, 1932), 128 pp.  Hillel Rogof has written that “Rumshinski was also a talented author of stories.  He noted the distinctiveness in people, what singled out the individual from the mass, and he knew how to formulate this in simple, clear language.”  He died in New York. 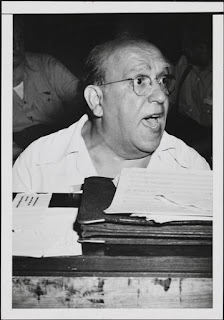