PERETS MIRANSKI (PERETZ MIRANSKY) (February 24, 1908-1993)
He was born in Vilna, Lithuania.  Until age twelve he attended religious elementary schools and several years as well in a Jewish public school.  He debuted in print in Vilner tog (Vilna day) on February 2, 1934 with two fables: “Di poyk un di fleyt” (The drum and the flute) and “Di hak un di koyln” (The axe and the coal).  That same year he was accepted into the group of writers and painters, “Yung vilne” (Young Vilna).  Until the outbreak of WWII, he published fables in: Yung vilne, anthologies 2 (1935) and 3 (1936); Etyudn (Studies) in Vilna (1935); Vilner tog (1935-1937); Literarishe bleter (Literary leaves) in Warsaw (1937); Almanakh (Almanac) of the Vilna Jewish literary association (Warsaw, 1938); Naye bleter (New leaves) in Kovno (1939); and Emes (Truth) in Kovno (1941).  His fables were reprinted in the newspapers of Bialystok, Grodno, Gluboke (Glubokoye or Hlybokaye), and elsewhere.  Some of his revue pieces were staged in the revue theater “Ararat” [acronym for: Artistic Revolutionary Revue-Theater] and in the Vilna Jewish marionette theater “Maidim.”  After the Nazi invasion of Soviet Russia, he fled Vilna and made his way to Samarkand, where he worked in a cooperative.  After the war (1945-1946), he lived in the Tempelhof displaced persons’ camp, near Berlin, where he served as a member of the editorial board of the journal Undzer lebn (Our life) and was active in the cultural work among the survivors.  In 1949 he settled in Canada.  In 1951 there was published in Montreal his book A likht far a groshn (A light for a penny), in which one will find his fables from the Vilna period and his other poetry from Samarkand and wandering through Europe.  His poems were also published in Di goldene keyt (The golden chain) in Tel Aviv 23 (1955), and in Canadian Yiddish newspapers.  He had prepared for publication three books: children’s poetry, fables, and a collection of adapted poetry from world poets.  Later books include: Shures shire, lider un mesholim (Lines of poetry, poems and fables) (Tel Aviv: Perets Publ., 1974), 251 pp.; Tsvishn shmeykhl un trer, mesholim (Between laughter and tears, fables) (Toronto, 1979), 197 pp.; Nit derzogt, lider (Implied, poetry) (Tel Aviv: Perets Publ., 1983), 267 pp.  He died in Canada. 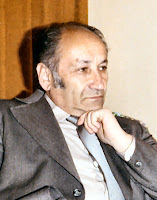