SHMUEL MERLIN (January 4, 1910-October 4, 1994)
He was born in Kishinev, Bessarabia.  He studied in the city’s Hebrew high school run by Agudat Yisrael.  His higher education was acquired at the Sorbonne in Paris, where he also studied at the L’École des hautes études en sciences sociales (School for advanced studies in the social sciences).  He began writing in Hebrew while still in school.  He served as editor of his school’s student magazines Aḥdut (Unity) and Nitsanim (Buds).  He was a member of Betar and one of its organizations in Romania.  He worked as a close assistant to Jabotinsky and was the first editor of the Irgun’s Yiddish daily newspaper Di tat (The action) in Warsaw.  He wrote in Hebrew, Yiddish, and English.  He placed work in the Yiddish-language Betar organs: Unzer tsayt (Our time) in Romania and Unzer velt (Our world) in Warsaw.  He also wrote for Tog (Day), edited by Noyekh Prilucki, in Paris (1936).  He translated for the weekly Pariz (Paris) in 1938 from M. Aldanov’s book Portretn (Portraits) the chapters on: “Hitler,” “Pilsudski,” and “Lloyd George.”  In Hebrew he wrote for Hamashkif (The spectator) and Hayarden (The garden) in the state of Israel.  He died in Israel. 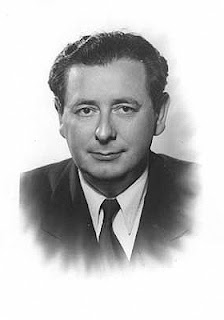