MOYSHE MENAKHOVSKI (MENACHOVSKY) (November 15, 1893-July 17, 1969)
He was born in Pinsk, Polesia.  He attended religious elementary school and a Russian Jewish state school, and he graduated as an external student from the Pinsk senior high school.  In the 1920s he completed the pedagogical course of study run by Tsisho (Central Jewish School Organization) in Warsaw, and later worked as a teacher in secular Jewish schools in Poland.  From his early youth he was active in the Jewish labor movement.  From 1910 he was an illegal leader of the Labor Zionist party in the Pinsk region, where he was arrested and imprisoned in Tsarist jails, later living illegally in Kobrin, Luninets, Vilna, and Warsaw.  In 1913 he participated in the Labor Zionist conference in Cracow.  During WWI the Germans sent him to perform forced labor, but he escaped from a labor camp and lived in Pinsk under a false name.  In 1920 he was cofounder of the first secular Jewish school in Brisk (Brest), Lithuania, and he was also among the founders and until 1930 a member of the executive administration of Tsisho in Poland.  Over the years 1926-1930, he was the Labor Zionist representative on the Brisk city council.  In 1929 he was a Labor Zionist candidate to the Polish Seym.  He was a member, 1920-1930, of the central committee of the Labor Zionists in Poland.  In 1930 he immigrated to Canada.  He founded the Borokhov school and kindergarten in Toronto in 1932.  In 1936 he visited the land of Israel and Soviet Russia and wrote a series of articles about both countries.  In 1948 he visited Brazil, Uruguay, and Argentina.  In 1954 he was a free auditor at the Hebrew University in Jerusalem.  He took part in the establishment of the World Jewish Culture Congress and participated in its second conference in New York in 1959.  He began writing (under the pen name Ben-Tsien Shvartsman) in Dos vort (The word) in St. Petersburg (1912), and later became a regular contributor to: Arbeter-tsaytung (Workers’ newspaper), Arbeter-velt (Workers’ world), Naye shul (New school), and Der yunger dor (The younger generation)—in Warsaw; Tsukunft (Future), Proletarisher gedank (Proletarian idea) for which he also served as editor (1938-1941), Undzer veg (Our way), Undzer shul (Our school), and Pedagogisher byuletin (Pedagogical bulletin)—in New York; and Shul-bleter (School pages) in Buenos Aires; among others.  He published hundreds of articles on political, literary, and pedagogical themes, travel narratives, and the like.  For Sefer brisk d’lita (Volume for Brisk, Lithuania) (Jerusalem, 1957), pp. 399-402, he wrote: “Poyle tsien in brisk” (Labor Zionism in Brisk); and in the almanac Yidish (Yiddish) (New York, 1961), pp. 293-306, he penned: “Tsurikgeshtanene kinder in der yidisher literatur” (Children lagging behind in Jewish literature).  In book form: Di virkung fun der milkhome af undzere kinder (The impact of the war on our children) (Toronto, 1943); Jewish Youth at the Crossroads (Toronto, 1937), 16 pp.; Ber borokhov, zayn lebn un zayn shafn (Ber Borokhov, his life and his works) (Buenos Aires, 1959), 112 pp.; Gemishtes khasenes in der yidisher literatur (Mixed marriages in Jewish literature) (Buenos Aires: YIVO, 1968), 85 pp.; A balerndiker simpozyum vegn yidish in medines yisroel (An instructive symposium on Yiddish in the state of Israel) (Mexico City, 1968), 15 pp.; Defektive kinder (Defective children) (Tel Aviv: Perets Publ., 1971), 127 pp.  He was a member of the director’s council of YIVO.  He published under such pseudonyms as: M. Shvartser and A Man.  In May 1964 his seventieth birthday was celebrated, and a jubilee collection of essays was published by the Toronto jubilee committee: Der veg (The path) (Tel Aviv: Perets Publ.), 168 pp.  He made great contributions to various areas of Jewish cultural activity, and as a pioneer in the secular Jewish school movement in every city and country in which he was active.  He died in Toronto. 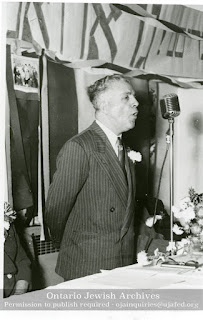