YITSKHOK METSKER (ISAAC METZKER) (July 1901-October 6, 1984)
He was born in the village of Kazatshine-Lanovits (Kazachina-Lanovichi), Galicia.  He was the author of stories and novels.  For generations his family owned their own fields.  For their children they brought in teachers and tutors from the city.  At age six he began to study Polish and German, and he later attended the Polish high school in Borshchiv, Ukraine.  In 1922 he took classes at the Humboldt senior high school in Berlin, and in 1924 he made his way to New York without a visa, and there he worked by day and studied in the evenings.  After graduating from the Jewish teachers’ seminary in New York, in 1933 he became a teacher in schools run by the Workmen’s Circle.  He debuted in print in 1927 with a story and several poems in Amerikaner (American).  He went on to publish stories—mostly on village life—and reportage pieces in: Fraye arbeter-shtime (Free voice of labor), Frayhayt (Freedom), Kinder zhurnal (Children’s magazine), Tog (Day), and Tsukunft (Future), among other publications.  Metsker’s first story in Forverts (Forward) in New York was published in 1933, and in from 1944 he became a regular contributor.  In addition to stories, he also published there novels: Di eybike shtime (The eternal voice) in 1942; Bitris un ben (Beatrice and Ben) in 1945—both concerned with the lives of Jewish immigrants in the United States; Afns zeydns felder (On Grandfather’s fields) of 1952; and Af amerikaner erd (On American soil).  From 1945 he wrote a weekly reportage piece on the Jewish court in New York.  His work also appeared in Shimshon Meltser’s Zugot, shemona asar sipurim shel shisha asar meḥabrim beyidish (Pairs, eighteen stories by sixteen authors in Yiddish) (Tel Aviv: Hamenorah, 1972), in Eliezer Greenberg and Irving Howe’s Treasury of Yiddish Stories (New York, 1954), and in Greenberg and Howe’s Yiddish Stories Old and New (1977).  He also wrote under such pen names as: Y. M. Metts, Y. M. Kersht, and Y. Fleysher.  In book form: Toli un tobi (Toli and Tobi) (New York: Matones, 1936), 158 pp.; Erd un zun (Land and sun) (New York, 1937), 189 pp.; Don yitskhok abravanel, 1437-1509 (Don Isaac Abravanel, 1437-1509) (New York: Kinder-ring, 1941), 48 pp.; Afn zeydns felder (New York: Matones, 1953), 477 pp., published in Sh. Meltser’s translations as Besedotav shel saba (Merḥavya, 1959), 395 pp.; Gots bashefenishn (God’s creatures) (New York: Matones, 1958), 207 pp.  In English he published A Bintel Brief (New York, 1971), on the lives of Jewish immigrants in America, based “bintel brief” (batch of letters) which were published daily in Forverts over the course of sixty years.  “Deeply rooted in Y. Metsker, it would appear,” noted Shmuel Niger, “is what he absorbed in himself when he was a villager, of nature, as well as what he possesses in himself of silent, powerful instincts.  This is primarily to be found in the young storyteller and that is the innovative elements he introduced into our literature….  We have several authors who depict nature, but Y. Metsker is a nature-describer, not a depicter of nature.”  “Y. Metsker,” noted A. Mukdoni, “is pastoral through and through.  He has a villager’s eyes; he sees just like a cucumber grows….  [His] stories are new, original, and vigorous….  He is a writer with his own face, first and foremost with his own language.”  Concerning his novel Afn zeydns felder, Der Lebediker (Khayim Gutman) wrote that it “could stand at the same rank as Hamsun’s Blessings of the Earth, with the difference that, after the Jewish blessing, there followed behind a curse, the curse of Diaspora….  His book demonstrates, in addition to its extraordinarily colorful storytelling, it also contains poetic-lyrical talent.”  And, on the same book, Yankev Glatshteyn noted: “He erected a village with Jews and Gentiles and went from home to home, from tree to tree, from field to field, from bird to bird, from holiday to holiday, and all in celebration.  At times this song is a poem of joy, at times it is profoundly sad, but a sadness that is part of a complete life.”  He died in Bridgeport, Connecticut. 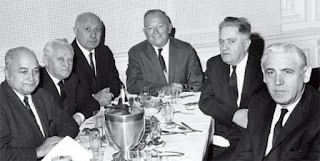 Metsker, second from right, at a meeting of Forverts editors