PINKHES MINKOVSKI (April 5, 1859-January 18, 1924)
He was born in Sde Lavan (Bila Tserkva, Belaya Tserkov), Kiev district, Ukraine, into a family of cantors and prayer leaders who descended from Tosafot-Yom-Tov [Yom Tov Lipmann Heller, 1578-1654].  Until age thirteen he studied in religious elementary school and synagogue study hall, as well as with private tutors for secular subject matter.  He later filled out his knowledge at a senior high school in Vienna, where he also studied music at the conservatory.  From his youth he excelled at singing and prayer, was a chorister to the celebrated cantor Nisn Belzer [Nissan Spivak], and later was a cantor in Kishinev and Kherson.  In 1881 he became cantor in Odessa, but a year later he departed for the United States, where (until 1887) he served as cantor at the Adas Yeshurun synagogue in New York.  Displeased that his vocal music had not found an appreciative reception in New York, he left America and until 1908 lived in Vienna, Paris, and other cities in which he performed at concerts of cantorial song.  Over the years 1908-1922, he lived in Odessa where he served as chairman of “Hazemir” (The nightingale), “Ḥoveve sfat ever” (Lovers of the Hebrew language), and other groups.  During the Kerensky government in Russia (1917), he was professor of Jewish music and general music history at the Odessa Jewish Conservatory, but when the Bolsheviks began to communize Jewish life, he left Russia, lived for a time in Paris, and from there once again came to the United States.  He was honorary president of the Organization of Cantors in America and Canada.  He wrote a great deal about the cantorial art and music in Hebrew, Yiddish, Russian, and German.  He contributed to M. Spektor’s Di naye velt (The new world) in Warsaw and to Sh. Hokhberg’s Unzer lebn (Our life) initially in Warsaw and in 1916 in Odessa, where he placed his “Muzikalishe shmuesn” (Musical chats).  (Minkovski’s articles were later republished in: Di khazonim-velt [The cantors’ world] in Warsaw (1934-1935), and there as well he published portions of his works “Khor-dirigentn in der sinagogaler muzik” [Choir directors in synagogue music] and “Der idisher tam fun negine” [The Jewish flavor of vocal music], among others.)  He also contributed work to: Hamelits (The spectator), Hatsfora (The times), Hashiloaḥ (The shiloah), Haolam (The world), Hatekufa (The epoch), Yarḥon haḥazanim (The cantors’ monthly), Ḥazanut (Cantorial art), and Reshumot (Records)—in New York; among others.  He authored pieces about Jewish vocal and instrumental music for Y. D. Ayzenshtayn’s Otsar yisrael (Treasury of Israel).  He also wrote for the progressive Russian-language press in Odessa; and for the German-language periodicals Die Warheit (The truth) in Vienna and Hamburger Familien-Blatt (Hamburg family newspaper).  In book form: in Yiddish, Moderne liturgye in unzere sinagogen in rusland (Modern liturgy in our synagogues in Russia), 2 vols. in 1 (Odessa, 1910), 251 pp.; in Hebrew, Perakim beshir (Sections of a song) (Odessa, 1911); in German, “Gotteslehre und Gottesdienst” (Doctrine and worship), in Die Warheit (1902), Die Entwicklung der synagogalen Liturgie bis nach der Reformation des 19. Jahrhunderts (The development of synagogue liturgy until after the Reform movement of the nineteenth century) (Odessa, 1902), 18 pp., and Der Sulzerismus und die moderne synagogale Liturgie (Sulzerism and modern synagogue liturgy) (Vienna, 1905), among others.  He died of blood poisoning in Boston and was buried in Philadelphia.  He left behind in manuscript: in Yiddish, “Geshikhte fun khazones” (History of the cantorial art) and “Vegn kiselgofs lider-zamelbukh” (On Kisselgoff’s collection of songs), among others; in Hebrew, twenty-three chapters of an autobiography (published in Hadoar [The mail] in New York in 1924) and portions of a work entitled “Shira bape veshira bakelim” (Songs, vocal and instrumental), among others works.  In Morgn-zhurnal (Morning journal) in New York, throughout the entire year of 1924 his autobiography was published in Yiddish. 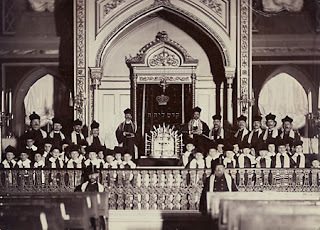 Minkovski (back row, sixth from right) with the boys’ choir at the Brody Synagogue