YOYSEF (JOSÉ) MENDELSON (November 1, 1889-July 24, 1970; 1891-1969?)
He was born in Tsherkas (Cherkasy), Kiev district, Ukraine.  His father, Hillel Mendelson, was an ordained rabbi, but not wishing to devoted himself to the rabbinate, he turned his attention to business and was a Talmud teacher.  Yoysef received a Jewish education with his father.  Early on he acquired the reputation of a prodigy.  At age thirteen he traveled to Kremenchug to study in the yeshiva of the “great anti-Hassid” (Rabbi Eliezer Epstein) and later on his own at the synagogue study chamber.  He studied modern Hebrew, Russian, and general subject matter with private tutors, and as an external student in Cherkasy and Zolotonosha he passed the examinations and received his high school diploma in 1910.  Because of the numerus clausus, he was unable to enter university, and he thus left Russia and in January 1912 arrived in Argentina.  He became a Hebrew teacher in a YIKO (Jewish Cultural Organization) school in Palasios (Mozesville), mastered Spanish, and soon became the director of the school.  While still in his youth in Russia, Mendelson began writing and publishing correspondence pieces in the provincial Russian press.  In Mozesville he started writing in Yiddish and debuted in print with a feature piece about Perets Smolenskin in the Zionist monthly journal Idishe hofenung (Jewish hope) in Buenos Aires (December 1912).  Together with Z. Brokhes, he edited the journalistic-literary weekly Der kolonist (The colonist), which appeared in Dominguez, Entre Rios Province, in which he wrote (also using such pen names as Ben-Hillel, A. Cherkaski, Nemo, and Dizi) articles, features, and essays on Yiddish and Spanish writers.  In April 1917 he began contributing to the daily Idishe tsaytung (Jewish newspaper) in Buenos Aires, in which he (under the pseudonym Borekh der Griner [Borekh the greenhorn]) ran a column  entitled “Laykhte shmuesn” (Light conversations).  Over the years 1923-1929, he served as editor of the newspaper, and over the course of twenty-seven years he published essays, literary criticism, legends drawn South American folk epics, and articles of popular scholarship on Jewish learning and Jewish history, as well as articles on topics of the day.  He translated for the newspaper from world literature a large number of stories, novels, essays, and poems, among them: Vincente Blasco Ibáñez, Luna Benamor; Pierre Benoit, Le Puits de Jacob (Jacob’s well); Kasanov, The Russian Revolution; Émile Zola, Vérité (Truth); Charles Dickens, A Tale of Two Cities; Daniil Mordovtsev, Nashi piramidy (Our pyramids) and Irod (Herod); and stories by such Spanish writers as Gustavo Adolfo Bécquer, among others.  Among his translations published in book form: Manuel Gálbez, In a forshtodt (In a suburb [original: História de arrabal (Story of a suburb)]) (Buenos Aires: Yidish, 1933), 119 pp.; Alberto Gerchunoff, Borekh spinozas libe (Baruch Spinoza’s love [original: Los amores de Baruj Spinoza (The loves of Baruch Spinoza)]) (Buenos Aires: Sociedad Hebréica Argentina, 1933), 92 pp.  Over the period 1919-1921, he studied chemistry at the University of La Plata.  He was the editor of the first collection of young Yiddish writers in Argentina: Af di bregen fun plata (On the shores of the Plata [River]) (Buenos Aires, 1919), 192 pp., for which he wrote an introduction entitled “Undzer svive un unzer geshtalt” (Our environs and our image).  Together with Yisroel Helfman, in 1921 he edited the monthly journal Argentine (Argentina)—only three issues appeared in print (July, August, and September).  For a time he also edited, with P. Kats, the organ of Argentinian Labor Zionism, Di naye tsayt (The new times).  He contributed work as well to: the socialist periodical Der avangard (The avant-garde); the monthly Der shpigl (The mirror); the Zionist weekly Di idishe velt (The Jewish world); the Hebrew-language monthly Habima haivrit (The Hebrew stage), edited by M. Oleysker; and the monthly for literature, art, and cultural issues, Dorem-amerike (South America), edited by Kh. B. Bloshteyn; among other Jewish publications in South and North America.  He also edited Rashi-bukh, tsum naynhundertstn geburts-yor (Rashi volue, on the 900th anniversary of the year of his birth) (Buenos Aires: Committee to celebrate the 900th birth year of Rashi and the 800th anniversary of the death of Rabbi Yehuda Halevi, with the Zionist Federation of Argentina, 1940), 350 pp., with contributions by twelve authors.  Mendelson’s piece in this volume was “Rashi, zayn lebn, virkung un geshtalt” (Rashi, his life, influence, and image), pp. 21-125.  The essay was divided into three parts: “Rashi in der umshterblekhkeyt” (Rashi for all times); “Lebn, svive un perzenlekhkeyt” (Life, environment, and personality); and “Untern tseykhn fun ershtn kreytstsug” (Under the sign of the First Crusade).  This essay also appeared in Spanish and a portion of it in Hebrew.  Another piece by Mendelson appeared in this same volume (under a pen name of Y. Ben-Hillel): “Rashi in der legendografye” (Rashi in hagiography).  On Mendelson’s fiftieth birthday, a committee from the community brought out a volume of his earlier published works under the title Amol in a halbn yoyvl (Once in a half jubilee) (Buenos Aires, 1943), 510 pp., with a preface by the jubilee committee and a foreword and afterword by the author.  He was co-editor and principal contributor to the Spanish-Yiddish monthly Judaica in Buenos Aires.  Among his writings in Spanish: 50 años de colonización judía de argentina (Fifty years of Jewish colonization in Argentina) (Buenos Aires, 1939), 315 pp.  He contributed two pieces to the jubilee volume honoring the twenty-fifth anniversary of Idishe tsaytung: “A yoyvl yidish lebn” (A jubilee of Jewish life), pp. 49-98; and (under the pen name Y. Ben-Hillel) “Gest un shlikhim in undzer yishev” (Guests and messengers in our settlement).  In 1943 he became director of the Buenos Aires Hebrew-Yiddish teachers’ seminary.  In 1953, after thirty-six years of contributions to Idishe tsaytung, he withdrew from active participation.  He translated from Hebrew Zalman Shazar’s Or ishim (Light of personalities) into Yiddish as Likhtike perzenlekhkeytn (Buenos Aires: Kiem, 1963), 297 pp.  In 1960, on the occasion of his seventieth birthday, people dedicated articles to him in the Yiddish press in Argentina and North America.  He died in Buenos Aires. 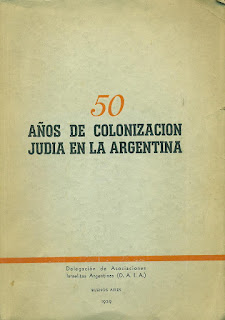