YOYSEF (JOSEPH) MLOTEK (July 25, 1918-July 2, 2000)
He was born in Proshevits (Proszowice), Kelts (Kielce) district, Poland.  In 1925 he moved with his parents to Warsaw, where he received a secular Jewish education.  While still young he was enlisted in the socialist movement and served as secretary for the Bund’s children’s organization “SKIF” (Sotsyalistishe kinder farband, or Socialist children’s union) in Warsaw.  In 1930 he began to publish poems in Kleyne folkstsaytung (Little people’s newspaper), a weekly supplement to the Bund’s Folkstsaytung (People’s newspaper) in Warsaw, and he went on later to publish in Kinder-fraynd (Children’s friend), published 1938-1938, and Yugnt-veker (Youth alarm) in Warsaw, as well as in Kinder-zhurnal (Children’s magazine) in New York.  In 1936 he became a regular contributor to Folkstsaytung (he served as a reporter on labor affairs).  In September 1939, after the outbreak of WWII, he fled with the stream of refugees from Warsaw to Vilna, where in 1940 he worked with Noyekh Prylucki, taking down testimony from Jewish refugees from Poland.  He was also a research student at YIVO.  Over the years 1941-1945, he lived as refugee in Shanghai, China, and contributed to Yiddish periodical publications published there.  He also published songs (using the pen name “Petronyus”) in the collection In veg (On the road), published by the association of Yiddish writers and journalists from Poland in Shanghai—only one number appeared in print (November 1941)—and in the weekly Unzer velt (Our world) (1946), edited by Lazar Kahan, Moyshe Elboym, and Yankev Fishman, in all twenty-five issues appeared.  He subsequently made his way from Shanghai to Canada, where (1947-1949) he worked as a teacher in the Jewish day school in Calgary.  In 1949 he arrived in New York, where he was a teacher in an elementary school and a middle school of the Workmen’s Circle.  He continued his education in New York at the Jewish teachers’ seminary and at the New School for Social Research.  He was executive secretary, 1950-1951, of the youth division of the World Jewish Culture Congress.  From 1952 he served as executive secretary of Workmen’s Circle schools in New York.  He published articles in: Forverts (Forward), Tsukunft (Future), Unzer tsayt (Our time), Der veker (The alarm), Der fraynd (The friend), and Kultur un dertsiung (Culture and education)—in New York.  Together with N. Khanin, he co-edited the special publication of Kultur un dertsiung of February 1956, dedicated to fifty-five years of the Workmen’s Circle.  In book form: Yidishe kinder alef (Jewish children, 1), a textbook for Yiddish elementary classes, published by the education committee of the Workmen’s Circle (New York, 1959), 104 pp., (New York, 1971), 128 pp.; Perl fun der yidisher poezye (Pearls of Yiddish poetry) (Tel Aviv: Perets Publ., 1974), 564 pp., with Khane Mlotek.  He served as the narrator of the record albums: A mol iz geven a mayse (There was once a story), Lomir zingen (Lets sing), Zingt mit mir (Sing with me), and Dos goldene land (The golden land).  He also performed on Yiddish radio in New York dramatizations for Yiddish schools and for various Jewish organizations.  In his later year, Mlotek was also the editor of Kinder-tsaytung (Children’s newspaper), a monthly put out by the Workmen’s Circle in New York.  He was the husband of the folklorist Khane Gordon-Mlotek.  He died in New York. 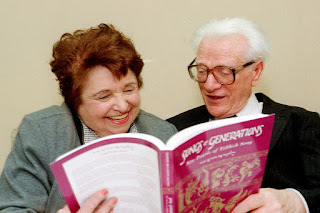