YEHUDA-LEIB HACOHEN MAIMUN (FISHMAN) (December 12, 1875-July 10, 1962)
He was born in Markulesht (Mărculeşti), Bessarabia.  He was the son of Avrom-Elemeylekh Soyfer and grandson of Rabbi Mortkhe Hacohen Maymun.  He studied in the yeshivas of Vilna and Kovno, and he received ordination into the rabbinate from the great scholars Rabbi Yekhiel-Mikhl Halevi Epshteyn [1829-1908], author of Arukh hashulḥan (The table is set), Rabbi Yitskhok Dantsig of St. Petersburg, Rabbi Hillel Trivush, and others.  Under the influence of Rabbi Yitskhok-Yankev Raynes, he joined the religious Zionist movement in 1900 and took part in the founding of Mizrachi organization.  He debuted in print in 1899 with an essay in the Orthodox journal, Hapisga (The summit), edited by H. D. Trivush.  His first religious volume, Hanoten bayam derekh (He who makes his way through the sea), “a debate between a shrewd man and a master” (1902), had a major impact.  Such was also the case with his second Talmudic text, Ḥeder horati (The chamber of the one who conceived me) (1912).  From 1898 he was participating in Zionist congresses.  In 1912 he made aliya to Israel as a representative of the Mizrachi World Center (Merkaz shel mizraḥi), founded a Mizrachi Tachkemoni school in Jaffa, and also led the way with general Mizrachi education in the land of Israel.  When WWI broke out, the Turkish authorities arrested him for his Zionist activities.  He was freed only by virtue of the intervention of the American Zionist organization, but he had to leave the land of Israel.  He then came to the United States, where through the spoken and written word he led a broad campaign on behalf of the Mizrachi party.  He returned to Israel at the end of the war, ran the world center of Mizrachi, and in his mission on many occasions visited the largest Jewish communities in many countries.  As a member of the executive of the Jewish Agency, he participated in important negotiations with the British authorities.  On Black Sabbath [Operation Agatha], Tammuz [June 29,] 1946, when the Mandate forces arrested all the leaders of the Jewish Agency, he was among them, but the high commissioner issued an order to release him after the fuss provoked by his disinclination to ride on the Sabbath.  When the state of Israel was proclaimed in 1948, he was among the signatories of the declaration of independence.  He was Minister for Religious Affairs in the first cabinet, and from this post he resigned in 1951, after a conflict with David Ben-Gurion over religious education for immigrant youth.  From that point he withdrew from politics and dedicated himself entirely to literary work.  He served as editor of historical-biographical anthologies and collections, and of the Torah journal Hayona (The dove) and the Mizrachi weekly Hator (The turtle-dove).  In 1936 he founded the semi-annual journal Sinai (fifty-five issues appeared in print).  He was as well the founder of the publishing house “Mossad Harav Kook,” which brought out hundreds of books.  He himself published numerous religious works and pamphlets.  His book series Sare hamea (Rulers of the century) appeared in six volumes, and his religious works—Lemaan tsiyon lo eḥeshe (For Zion’s sake, I shall not be silent), Mide ḥodesh beḥodsho (Month by month), Ḥagim umoadim (Jewish holidays and festivals), and Yiḥuse tanaim veamoraim (The heritage of the earlier and later rabbis of antiquity) aroused considerable attention in the Hebrew cultural world.  In Yiddish he published articles in: Yudishe shtime (Jewish voice) in Warsaw; and Der mizrekhi-veg (The Mizrachi way), Mizrekhi-byuletin (Mizrachi bulletin), and Tog-morgn-zhurnal (Day morning journal) in New York.  He penned in Yiddish: Eynige verter vegn der mizrekhisher mitelshule takhkemoni in yafo, erets-yisroel (A few words about the Mizrachi middle school Tachkemoni in Jaffa, Palestine) (New York, 1916), 16 pp.; Der kolonyal fond fun dem mizrekhi, zayn bashtimung un zayn tsvek (The colonial fund of Mizrachi, its designation and its purpose) (New York: Mizrachi, 1915/1915), 16 pp.; Vos iz der mizrekhi? (What is Mizrachi?) (New York: Mizrachi Central Bureau, 1916), 31 pp.  Several of his pamphlets were also published in English.  He bequeathed a private library of over 40,000 texts, among them many in manuscript, rare first editions (incunabula), and other rarities.  In the state of Israel there was established a colony in his name, and on the occasion of his eightieth birthday he was awarded honorary citizenship to the city of Jerusalem.  Among his pen names: Y. Bin Nun, Rav Kahana, and Stam Sifre.  He died in Tel Aviv. 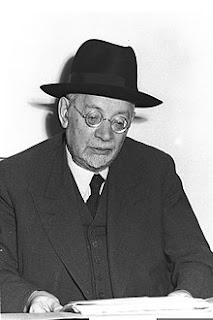