KHAYIM-MIKHL MIKHLIN (February 5, 1867-July 24, 1937)
He was born in Khaslavitsh (Khaslavich), Mohilev district, Byelorussia.  In his childhood, he was brought to Israel.  He studied in religious elementary school and in a yeshiva, later studying on his own secular subject matter.  He became a teacher in the “Ets-Ḥayim” (Tree of life) yeshiva and in the first girls’ school in Jerusalem, and he later served as secretary of the Ḥakham Bashi (chief rabbi) and for a time (1912-1915) was chairman of the Mizrachi organization in Israel.  Until 1934 he lived in Jerusalem, later in Petaḥ Tikva.  His writing activities began (using the pen name Neḥelami) in Hatsfira (The siren) in Warsaw (1887), later as a contributor to: Hamelits (The spectator) in Odessa; Hayom (Today) in St. Petersburg; Hamagid (The preacher) in Cracow; and Haivri (The Jew) in New York; among others.  For many years he was the Israel correspondent for Di yudishe tageblat (The Jewish daily newspaper) in New York, in which, aside from correspondence pieces, he also published impressions of old Jerusalem, historical surveys, and geographical-topographical descriptions of the land of Israel’s antiquity and excavations.  He was the principal contributor and actual editor of the biweekly (in Yiddish, Hebrew, and Judezmo) Hapardes-der pardes (The orchard) in Jerusalem (1909-1910), and there he defended the Yiddish vernacular, when extreme Hebraists attacked the Yiddish part of Pardes—see: Zalman ben Tuvim, in Haḥerut (Freedom) (Jerusalem) (1909) and Kalman Silman, in Hatsvi (The gazelle) (Jerusalem) 168 (1910), as well as Mikhlin’s response (using the pen name Ben Shem) in Der pardes 3 (1910).  He also contributed to Lunts’s Luaḥ erets-yisrael (Calendar of Israel), to his Mishmar (Guard) 3, and other Yiddish and Hebrew publications in Israel.  His books: Hanezira (The nun) (Jerusalem, 1890), 32 pp.; Yosef enenu (Joseph is no more) (Jerusalem, 1911), 20 pp.; Har habayit (Temple mount) (Jerusalem, 1916/1917), 101 pp.; Hamitspe (The watchtower) (Jerusalem, 1919/1920), 24 pp.—historical tales and novels.  On his seventieth birthday, a collection of his articles entitled Tiferet shiva, sefer haḥayim (Hope of return, the book of life) (Tel Aviv, 1937), 144 pp., was published.  He also published under such pseudonyms as: Mem, Ben-Tsiyon, and Haneelam.  He died in Ramat-Gan and was buried in Jerusalem. 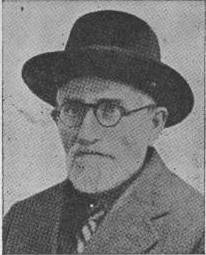