YANKEV MILKH (JACOB MILCH) (December 4, 1866-August 18, 1945)
The adopted name of Yankev Zoyermilkh, he was born in Warsaw, Poland.  He attended religious elementary school and acquired a reputation as a child prodigy.  While young he was drawn to Hassidism and Kabbala.  At age twelve he lost his father and became an apprentice to a wood carver in Warsaw.  At age fifteen he began to read books and became known among the followers of the Jewish Enlightenment in Warsaw, among them Benyomen Faygenboym.  In 1886 he left to serve in the Russian military, learning Russian in the army and acquainting himself with Russian literature.  After completing his service, he returned to Warsaw, but he was unable to find any employment for himself, and in 1891 he made his way to the United States.  In New York he stayed with his friend from Warsaw, B. Faygenboym, who was already well known at the time, and Milkh learned through him about the Jewish labor movement in America.  He worked as a carver and joined the carvers’ union as well as the S.L.P. (Socialist Labor Party).  Faygenboym also succeeded in getting him to start writing, and in October 1891 Milkh debuted in print with an article entitled “Der sotsyalizm in rusish poyln” (Socialism in Russian Poland) in the socialist weekly Arbayter tsaytung (Workers’ newspaper), in which he would later publish many more satirical-polemical articles and features (such as: “Gvald, lozt makhn di revolutsye” [Help, let’s make the revolution], a satire on the anarchists); under the pen name “Yakham ben Paltiel,” he also wrote a weekly column entitled “Gedanken fun a prostak” (Thoughts of a boor), in which he interpreted Marxism in a popular manner for thousands of readers of this socialist newspaper.  During the economic crisis of 1893, Milkh interrupted for a time his well-paying work in a furniture factory and became secretary of the “United Hebrew Trades” (Fareynikte yidishe geverkshaftn).  He organized the relief action which fed hundreds of the unemployed daily, and offered them aid in other ways as well.  He became a member of the publishing association of Arbayter tsaytung and was subsequently coopted onto its executive council, and the Jewish section of the S.L.P. selected him onto the committee to publish the monthly journal Tsukunft (Future).  In the controversy between Arbayter tsaytung publishing company and the opposition, which took place in the mid-1890s and led to the split in the S.L.P. (1897), Milkh played an important role—see his book, Di antshteyung fun “forverts” un zayn kamf mitn “abend blat” (1893-1902), zikhroynes (The rise of Forverts and its battle with Abend blat, 1893-1902, memoirs) (New York, 1936), 124 pp.  He later became well-to-do, but remained faithful to socialist ideals and worked for the Socialist Party and for trade unions.  Throughout this entire time, he never stopped writing and publishing his journalistic essays and literary critical articles in: Arbayter tsaytung, Abend blat (Evening newspaper), Di tsukunft (The future), Forverts (Forward), Fraye arbeter-shtime (Free voice of labor), Idisher kemfer (Jewish fighter), the anthologies of Shriftn (Writings), and Di velt un di menshheyt (The world and mankind)—all in New York; Di idishe arbayter velt (The Jewish workers’ world) in Chicago; Di proletarishe velt (The proletarian world), a publication of the PPS (Polska Partia Socjalistyczna, or Polish Socialist Party) in Warsaw (1907); Der pinkes (The record), edited by Shmuel Niger in Vilna (1913); and Di yudishe velt (The Jewish world) in Vilna (1914); among others.  Using the pseudonym “Dr. Mem” [the initial letter in the Jewish alphabet of his surname—JAF], he published several dozen articles entitled “Filozofishe shmuesn” (Philosophical chats), as well as the work “Spinoza un marks, a paralel” (Spinoza and Marx, a parallel) in Spinoza-bukh (Spinoza volume) (New York, 1932), pp. 54-93.  In 1909 he published the quarterly journal Di naye velt (The new world), “dedicated to the study of American institutions”—two issues appeared in print.  Over the years 1898-1901, he also placed his writings (including humorous stories) in such English-language publications as: Haverhill Social Democrat (Haverhill, Mass.) and International Socialist Review (Chicago); and he served as editor of the New York-based monthly Di fraye shtunde (The free hour) in 1909.  He was as well active in the Jewish teachers’ seminary, the American division of YIVO, and other Jewish organizations and institutions.  In the early 1930s he became a contributor to Morgn-frayhayt (Morning freedom) in New York, in which he published, among other items, chapters of his autobiography.  He was also a member of the editorial board of the monthly Yidishe kultur (Jewish culture) in New York; and he stood among the leadership of various institutions of the Jewish Communist movement in New York.  In book form, he published: Sotsyalizm, milkhome un natsyonalizm (Socialism, war, and nationalism), “an attempt to resolve several important strike issues in the socialist world” (New York: M. N. Mayzil, 1916), 75 pp.; Idishe problemen (Jewish issues), a collection of articles, vol. 1 (314 pp.), vol. 2 (236 pp.), vol. 3 entitled “Fun vanen shtamt religye un andere eseys” (Where religion comes from and other essays) (230 pp.) (all: New York, 1920); Biro-bidzhan, a naye epokhe in der idisher geshikhte (Birobidzhan, a new epoch in Jewish history) (New York: Cultural Wing of IKOR, 1936), 43 pp.; Di antshteyung fun “forverts” un zayn kamf mitn “abend blat” (1893-1902), zikhroynes (see above); Oytobyografishe skitsn (Autobiographical sketches) (New York: IKOR, 1946), 296 pp., with a foreword by Kalmen Marmor; Er shrekt zikh far platon, abisl perzenlekhs, dos iberike kultureles (He fears Plato, a little personally, the rest culturally) (New York, 1928?), 8 pp.  Among his translations: Perets Smolenskin’s Kevurat ḥamor (Burial of the ass) as Bagrobn baym parken (Burial near the fence) (New York, 1891); Gerhard Hauptmann’s Di veber (The weavers [original: Die Weber]), a play in five acts, which appeared in print in New York in 1905 and in Warsaw in 1906; Platons dyalogn (Plato’s dialogues), “with an introduction and foreword by the translator, with images of Socrates and Plato” (Brooklyn, 1929), 181 pp.  He died in New York. 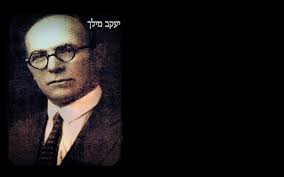