SHLOYME MIKHOELS (March 16, 1890-January 13, 1948)
He was born Shloyme Vofsi in Dvinsk (Daugavpils), Latvia, to a father who was a timber merchant and landlord.  At age four he began attending religious elementary school, later studying at home with his own teacher.  From his earliest youth, he drew, wrote poetry, and also composed a play which he staged with friends for his family and relatives.  In 1905 he moved with his family to Riga, where in 1908 he graduated from a senior high school, but because numbers of Jewish students exceeded the allowed percentage, he was unable to continue studying and became a tutor in the Russian language.  In 1910 he entered a private business school in Kiev, from which he was soon expelled for his part in student unrest following the death of Lev Tolstoy.  Over the years 1915-1918, he studied in the law faculty at St. Petersburg University.  In 1919 he joined Alexander Granovski’s Yiddish theatrical studio (later, “Moscow Chamber Theater”).  He debuted on stage in Maurice Maeterlinck’s Di blinde (The blind [original: Les Aveugles]), and he performed in Sholem Asch’s Der zindiker (The sinner) and later in the title role of Uriel akosta (Uriel Acosta).  Over the years 1920-1927, he played the lead roles in works by Sholem-Aleichem, Y. L. Perets, Avrom Goldfaden, and A. Vayter.  He particularly excelled in the role of Benyomen in Mendele’s Masoes benyomen hashlishi (The travel of Benjamin III), which he performed with B. Ziskin.  In 1928 he went with the Chamber Theater on a tour of Europe.  He staged (1929-1932): Dovid Bergelson’s Der toyber (The deaf man), Perets Markish’s Nit gedayget (Don’t worry about it!), Y. Dobrushin’s Der gerikht geyt (The trial is on), and other plays by Soviet Yiddish playwrights.  In 1933 he took over the leadership of the Moscow Yiddish State Theater (formerly, “Chamber Theater”).  He later made a great impression with his staging of Shakespeare’s King Lear in Yiddish.  He was the organizer and chair of the “Anti-Fascist Committee,” founded in Moscow after the German invasion of Soviet Russia.  He was co-editor of Eynikeyt (Unity) in 1942 in Kuibyshev.  He was also at that time in Uzbekistan in Central Asia, where he accomplished a considerable amount in raising the level of Uzbeki theater.  In June 1943, he and Itzik Fefer went abroad on assignment from the Anti-Fascist Committee.  They gave speeches in England, Canada, Mexico, and the United States.  At the Polo Grounds in New York, he spoke before tens of thousands of Jews about German crimes committed against the Jewish people.  Already in 1926 he had received the title “Distinguished Artist of the State Academic Theater.”  He acted in such Yiddish-language films as: Yidishe glikn (Jewish luck) and Neyten beker kumt aheym (Nathan Baker comes home); and he adapted texts for the stage and wrote a great deal for the theater.  He also contributed articles to: Eynikeyt in Moscow, Naye prese (new press) in Paris, and other serials.  In the anthology Yidn in sss״r (Jews in the USSR) (Moscow, 1935), he wrote (with Y. Dobrushin) “Yidishe teater-kultur in ratnfarband” (Yiddish theatrical culture in the Soviet Union).  Into Yiddish he translated Lenin’s Di valn in der grindungs-farzamlung un di diktatur funem proletaryat (The election at the founding meeting and the dictatorship of the proletariat [original: Vybory v Uchreditelʹnoe Sobranie i Diktatura Proletariata]) (St. Petersburg, 1920), 47 pp.  He edited Eynaktors (One-act plays) by various authors, with directorial comments (Moscow, 1940), 207 pp.  On Mikhoels’s artistic personality, books in Russian, Yiddish, and other languages have been published.  In the Yiddish press throughout the world, a great many articles were written about the highly secretive circumstances surrounding his death.  Numerous newspapers conjectured that he was murdered in or near Minsk.  A second conjecture claimed that he must have been murdered in Moscow.[1]  To his funeral in Moscow came tens of thousands of ordinary folks and intellectuals.  In 1962 the city administration of Tel Aviv named a square after Mikhoels.  His wife, Anastasia Pototskaia, left behind a Russian-language volume about her husband. 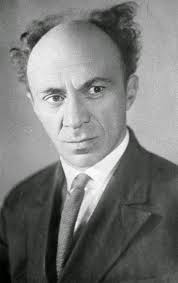 [1] Translator’s note. We now know that he was murdered in Minsk by State Security agents on orders from Stalin. (JAF)
Posted by Joshua Fogel at 05:26