BENYOMEN MINTS (BINYAMIN MINTZ) (January 12, 1903-May 30, 1961)
He was born in Lodz, Poland.  He studied in religious elementary school and a Gerer Hassidic synagogue, and with private tutors he studied secular subjects and foreign languages.  When WWI broke out, he was in a German resort, from which he was expelled as a Russian citizen, living for a time in Sweden and Finland, later in St. Petersburg and Vitebsk, where he studied in a Lubavitcher yeshiva and also graduated from a middle school.  In late 1918 he returned to Lodz, and there he was among the organizers of “Tseire Agudat Yisrael” (Agudat Yisrael youth) and “Poale Agudat-Yisrael” (Workers of Agudat Yisrael) in Poland.  He was a delegate to the first Orthodox Kenesia Gedola (World congress) in Vienna (1923), and he was selected onto the leadership of Agudat Yisrael.  In 1925 he went as a pioneer to the land of Israel and was a cofounder of the first Orthodox kibbutz “Ḥafets Ḥayim” and other religious kibbutzim and moshavim.  For many years he was president of World Agudat Yisrael and Poale Agudat-Yisrael; and he was a member of the executive of the World Jewish Congress and cofounder of Agudat Haitonaim (Journalists’ organization) in Israel.  During the war years, he was a member of the leadership of Association of Polish Jews in Israel and of Vaad Hahatsala (The Rescue Committee) with the Jewish Agency.  In 1945 he toured the former Nazi concentration camps in Germany and Austria and aided the illegal group Briḥa (“escape” [organized, illegal emigration from postwar Soviet zones into Allied-held terrain in Europe]).  He was a member of the highest security council of the provisional Israeli government, deputy to four Knessets, and for a time vice-president of the Knesset.  From July 1960 until his death, he served as Minister of Postal Services in the Israeli government.  This led to the split between Agudat Yisrael and Poale Agudat Yisrael, in whose name he assumed his position.  He organized the exhibition “200 Years of Hassidic Life in Eastern Europe.”  His writing activities began 1921.  He debuted in print with an essay in the collection Friling (Spring) (Lodz, 1922), and from that point in time, he contributed work to: Der yud (The Jew), Darkhenu (Our path), and Deglanu (Our banner) in Warsaw (1919-1926); Der yudisher arbayter (The Jewish worker), Unzer traybkraft (Our motive force), and Beys yankev zhurnal (Beys Yankev journal) in Lodz; Dos vort (The word) in Vilna; and other Orthodox publications in Poland and elsewhere.  Over the decade 1929-1939, he served as the Israeli correspondent for Dos yudishe togblat (The Jewish daily newspaper) in Warsaw and Riger haynt (Riga today), in which, aside from political articles, he published—mainly during his travels around the world—series of reportage pieces and descriptions of past Jewish life in Spain and Portugal, as well as the life of descendants of Marranos who were looking more than anything for the way back to Judaism.  He was a regular contributor to Ketuvim (Writings) in Tel Aviv (1925-1930), edited by A. Shlanski and A. Shteynman.  Together with Dr. E. Karlebakh, he cofounded: Haboker (This morning), Yediot aḥaranot (Latest news), and other serials.  He also placed writings in: Hatsfira (The siren), Haarets (The land), Davar (Word), Letste nayes (Latest news), and Shearim (Gates) of which he was also editor-in-chief—in Tel Aviv and Jerusalem; he was co-editor (with V. Laykhter) of Bitui (Idiom) in Tel Aviv (1926-1928), Poyln (Poland), and Yahadut polin (Jews of Poland) in Tel Aviv (1942-1944).  He was the author of the monographs: Meir beahava (Meir with love) (Tel Aviv, 1943), 64 pp., concerning Meir Shapiro, the founder of the Yeshivat Ḥokhmat Lublin; on the Gerer Rebbe, Avraham Mordechai Alter; on the Besht (Bal Shem Tov); on Rambam’s Yad haḥazaka ([Book of] the strong hand); and Megilat haḥurban (Scroll of the destruction); among others.  Together with Eliezer Shteynman, he published a monograph entitled Di nemen fun tel-aviver gasn (Names of the streets of Tel Aviv).  He wrote the introduction to Dovid Zaritski’s Holocaust poetry: Oysgetriknte oygn (Dried eyes) (Paris, 1947).  He died in Tel Aviv.  In his memory there was founded a colony of religious Jews “Yad Binyamin” in the Negev. 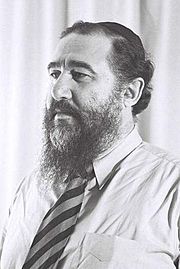