PINKHES LAVON-LUBYANIKER (PINḤAS LAVON) (July 12, 1904-January 24, 1976)
The adopted name of Pinkhes Lubyaniker, he was born in Kapitshintse (Kopychyntsi, Kopyczyńce), Ternopil district, eastern Galicia.  He was descended from a rabbinical pedigree.  He was the son of Avrom-Yoysef Lubyaniker, author of Ḥut hameshulash birke yosef (The threefold cord beside Yosef).  He studied in religious elementary school and in a Polish high school in Ternopil, and he later graduated from the law faculty of Lemberg University.  At age fourteen he became active in Hashomer (The guard), later known as Hashomer Hatsair (The young guard), and in 1920 he joined Tseire-Tsiyon (Young Zionists) and Hitaḥdut (the “union” of young Zionists).  In 1924 he was one of the founders of the Galician Gordonia and wrote for and edited all of its publications in Hebrew and in Yiddish.  He was a cofounder in 1927 of the Gordonia movement in Poland and one of the main managers of the assembly of the Gordonia world movement in Danzig.  In 1929 he made aliya with the first agricultural collective of Gordonia to Israel; he was with the settlements in Givat Bosel and Hadera, where he worked as a wage laborer.  Over the years 1935-1937, he was secretary of Histadrut (Federation of Labor).  He was a Mapai delegate to Zionist congresses.  From 1945 he was chairman of the construction cooperative of Histadrut, “Solel Boneh” (Paving [and] building).  He was selected in 1948 as a deputy to the first Knesset.  He chaired the labor office of the government and was a member of the commission for foreign and security affairs.  He was minister of agriculture (1950-1951) and minister without portfolio (1953).  From January 1954 until February 1955, he was defense minister in the cabinet of Moshe Sharett (Shertok).  He wrote under both names in both Hebrew and Yiddish, principally on Zionist matters, as well as on the problems of general Jewish and specifically the Israeli labor movement.  In pamphlet form, he published: (as Pinkhes Lubyaniker), Der mehus funem revizyonizm, in kamf gegen der natsyonalistisher avanture in tsienizm (The essence of Revisionism, in the fight against nationalistic adventure in Zionism) (Warsaw-Lemberg, 1927), 27 pp., second edition (Warsaw, 1934); Yesodot (Foundations) (Tel Aviv, 1941), 200 pp.; Tsum kheshbn fun a tkufe (Toward an accounting for the era) (Tel Aviv, 1949), 29 pp.; Fir yor histadrut-tetikeyt (Four years of Histadrut activities) (Tel Aviv, 1949), 62 pp., in Hebrew translation as Mehistadrut yeladim litenuat-noar (Tel Aviv: Gordonia-Makabi hatsair, n.d.), 30 pp.; Mifal arba shanim (The work of four years) (Tel Aviv, 1949), 47 pp.; (as P. Lavon), Dos is “kheres” (This is “freedom”) (Tel Aviv, n.d.), 15 pp., in Hebrew, Zot hi ḥerut, 15 pp.; Maasim umeshimot (Stories and objectives) (Tel Aviv, 1958), 30 pp.; and Darkha shel mifleget poale erets yisrael bahistadrut (The way of Mapai in the Federation of Labor) (Tel Aviv, 1959), 40 pp.; among others.  He also wrote in Yiddish under the name P. Lubyaniker: Maymorim, fun zayn bukh “yesoydes” (Essays, from the book Yesodot), translated from Hebrew (Lodz, September 1946), 77 pp.  He also published articles in Davar (Word), Hapoel hatsair (The young worker), Yisrael (Israel), and Di goldene keyt (The golden chain)—in Tel Aviv; Folk un land (People and country) in Lemberg-Warsaw (1925) and Lodz (1928); Unzer vort (Our word) in Paris; and Idisher kemfer (Jewish fighter) in New York; among others.  He died in Tel Aviv.[1] 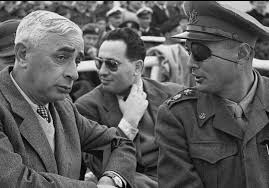 [1] Translator’s note.  Not mentioned was the famous Lavon Affair in which he resigned from the cabinet in 1955 for an accusation of a false flag operation, which had serious repercussions. (JAF)
Posted by Joshua Fogel at 15:28