AVROM LUSTIGMAN (b. April 4, 1910)
He was born in Kutne (Kutno), Poland.  He received a religious education, later studying at a Polish high school.  From 1934 he was living in the land of Israel.  He established in Jerusalem the book publisher “Or laam” (Light to the people).  In 1925 he began publishing stories in: Kinder velt (Children’s world) in Warsaw and Grininke beymelekh (Little green trees) in Vilna.  He contributed stories, sketches, and Arabic legends in Hebrew publications and to Tsien yugnt (Zion youth) in Jerusalem and to Velt-zhurnal (World journal) and Tidishe tsaytung (Jewish newspaper) in Tel Aviv.  In 1961 he launched the weekly newspaper Naye yisroel tsaytung (New Israel newspaper) in Tel Aviv and in 1972, with others, the periodical Oyfgang (Arise) in Ḥolon.  Among his pen names: Levi ben Menakhem, Ben Menakhem, A Lustig, A. Man, A. Lusi, B. Ilni, and A. M. Shaanan, among others. 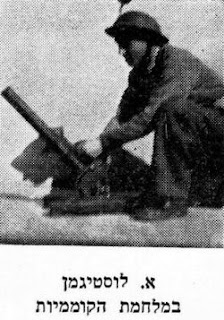 Lustigman during the War on Independence