AVROM-MOYSHE LUNTS (ABRAHAM MOSES LUNCZ) (December 16, 1854-1918)
He was born in Kovno, Lithuania, into a family of fine pedigree.  He received a strictly religious education.  At age six he was already studying Talmud, and at age twelve he was well known as a prodigy.  After his bar mitzvah, out of fear that this bright, young lad might become infected by the Jewish Enlightenment, his father sent him in 1869 to Jerusalem, where he studied at the Ets Ḥayim (Tree of life) yeshiva, although he yielded there to the temptation of the Enlightenment, and he was expelled from the yeshiva.  Because of persecutions inflicted upon him by zealots, he was compelled for a time to leave Jerusalem, turn to take up teaching, publishing articles in the Hebrew-language press—in Hamagid (The preacher), Ivri anokhi (I am Jewish), Hatsfira (The siren), and Hashaḥar (The dawn)—later returning to Jerusalem, where he was one of the founders there of the first library (1874), and he then turned his attention completely in the direction of research on the land of Israel in its past and present—a field that earlier had been solely the ken of non-Jews.  In 1876 he published the text, Netivot tsiyon viyerushalayim (The pathways of Zion and Jerusalem), on the geography of Jerusalem and environs.  In 1878 he published in the journal Shaare tsiyon (Gates of Zion), which he also edited, an article on the history of Jews in Israel from the time of Ramban [Naḥmanides] until the end of the fifteenth century.  His scholarly work in the field of research on Israel did not cease even when he became blind (ca. 1878).  In 1896 he began to publish his Luaḥ erets-yisrael (Calendar of Israel) which was renowned in the field.  Over the course of forty years after becoming blind, he wrote hundreds of articles in his field of research, and he published in Hebrew, German, and Yiddish essays and books, thirteen volumes of the collection Yerushalayim (Jerusalem), twenty-one volumes of Luaḥ erets-yisrael, three volumes of Hamaamad (The deputation), and more.  In Yiddish he published the volume Durkh palestina, ayne oysfihrlikhe geografishe und historishe bashraybung aller ortshaften palestinas, alles nokh di nayeste nokhforshungen, nebst mehrere interesante abbildungen in holts-shnit (Through Palestine, a detailed geographical and historical description of all the places in Palestine, all according to the latest research, the most interesting representations in woodcut) (Jerusalem: 1894/1895), 212 pp.  In the foreword to this book, he apologizes for turning his attention to “publishing a journalistic work, for while there are descriptions of Palestine in every language, only in zhargon [Yiddish], despite the number of its speakers amoutning to six million, there has not been a single book published on this topic.”  Together with the well-known advocate of Bilu—“Bet yaakov lekhu venelkha” (Let the house of Jacob go!), an early movement to settle the land of Israel—and agronomist Menashe Mairovitsh, he edited and published in Rishon Lezion a quarterly journal in Yiddish and Hebrew entitled Der kolonist—haikar (The settler), running to eighty pages per issues (1893-1894). 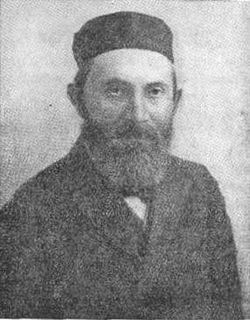