SHIMEN BERNFELD (January 7, 1860-March 8, 1940)
He was born in Stanislavov, eastern Galicia.  He was the son of a follower of the Jewish Enlightenment and Hebrew teacher.  He was one of the first to introduce into Hebrew writings scholarly research of a modern sort, and he was the author of dozens of important works in the “science of Judaism.”  For a certain period of time, he wrote in Yiddish and published in Yud (Jew), such as his “Dos folk un zayn inteligents” (The people and their intelligence) 2 (Warsaw, 1900); Fraynd (Friend), such as “Borekh shpinoza” (Baruch Spinoza) (St. Petersburg, 1904); and Dos lebn (The life), such as “Rebeynu moyshe ben maymon” (Rabenu Moshe ben Maimon [Maimonides]) 1 (Warsaw, 1905), among others.  On March 8, 1940, at the age of eighty, he died in Berlin. 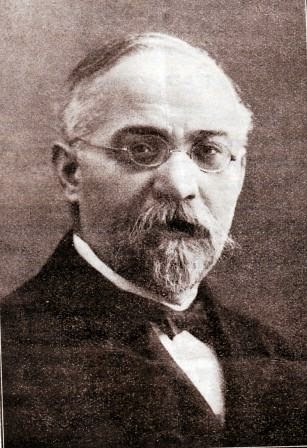