Y. S. KORNTAYER (1890s-1942?)
He was the composer of operettas.  Around 1918 he acted in a theater in Lodz.  From there he moved to Warsaw.  He wrote songs for the revue theater Sambatyon drawn from Osip Dimov’s Yoshke muzikant (Yoshke the musician) and other works.  Yonas Turkov write that Korntayer was his “regular song writer.”  Julius Adler staged Shakespeare’s Othello in Korntayer’s translation.  He was confined in the Warsaw Ghetto with his two children.  He was still living in early 1942.  In the ghetto he wrote the highly popular song “Glokn klingen, oder vuhin zol ikh geyen” (The bells are ringing, or where shall I go).  “This song is now sung,” wrote Turkov, “throughout the world by various singers.”  The authorship of the song remains completely unknown.  He died in the Warsaw Ghetto [possibly in Auschwitz]. 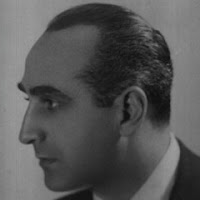