ASYA KURITSKI (ASIA) (March 8, 1930-2009)[1]
She was a poet, born in Vilna.  He father was a painter and writer of plays which were not staged.  She fled to the Soviet Union with her parents during WWII.  She was repatriated to Vilna in 1946 and came to Israel in 1951.  There she studied in a drama school and performed with Habima over the years 1955-1956.  From 1948 she published poems in: Dos naye lebn (The new life), Arbeter-tsaytung (Workers’ newspaper), Bafrayung (Liberation), and the anthology Nidershlezye (Lower Silesia)—all in Poland; later in Tsukunft (Future) and Svive (Environs) in New York); and Di goldene keyt (The golden chain), Letste nayes (Latest News), and Yerusholaimer almanakh (Jerusalem almanac), among others, in Israel.  In book form: Tsvaygn-tsiter (Tremble of branches) (Tel Aviv: Hamenorah, 1972), 106 pp.; Nit keyn albatros, lider (No albatross, poetry) (Tel Aviv: Yidish-bukh, 1981), 80 pp.  In Kuritski’s “intimate lyrical poetry,” wrote Yankev Glatshteyn, “there are lines of the very best that have been written in contemporary Yiddish poetry….  People are just as astounded by the brilliant images….  The poems as a whole leave behind a ripple of singing speech.”  She wrote under the name Asia.  She was last living in Jerusalem. 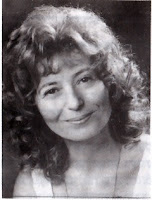