An author of poetry, stories, novels, and plays, he was born in Smorgon (Smarhon'), Byelorussia. His father Shloyme was a timber broker and his mother Sime the descendant of a family of farmers in the Jewish colony “Karka” (Soil) near Smarhon'. He studied in a “cheder metukan” (improved religious elementary school) and at the same time in a Russian Jewish public school, later in the yeshivas of Sventsyan (Švenčionys), Volozhin, and Mir. During WWI he moved to Kovno and worked as a teacher of Hebrew in the local Jewish school for orphans. In Kovno he began writing poetry in Hebrew and—liberating himself from the influence of Aḥad-Haam—in Yiddish. It was there that he composed his poems: “Vinter” (Winter), “Zilber shney un tekheyles” (Silver snow and blue), “Hordos” (Herod), and “Shtarb” (Die)—published in Di goldene keyt (The golden chain) (Tel Aviv) 27 (1957). In the autumn of 1916, he debuted in print in Literarishe zamlheftn (Literary anthologies) (Vilna) 1, with the poem “Shterndl” (Asterisk), which soon became a popular song, sung by people on a host of different occasions. In 1917 he published in the Vilna newspaper Letste nayes (Latest news) a fragment of a poem entitled “Di tseshterung fun bovl” (The destruction of Babylonia), and in 1918 he settled in Minsk with his parents, and there he worked as a teacher in Jewish schools. He was publishing at this time articles and poetry in the Bundist newspaper Der veker (The alarm) (Vilna) and Kultur un bildung (Culture and education) (Moscow). Among these poems was one that especially revealed the soul, the feelings of the young poet: “Do not forget me, my little hometown, / For I am alone, all alone… / The East calls, the West calls, / But I don’t know where to go….” These vacillations persecuted Kulbak for a long time, until he would later suddenly exclaim enthusiastically: “Let’s go! Let’s go! Let’s now leave behind the feeble….” In the end, though, he very often turned out himself to be among the “feeble ones,” because after the initial inspiration of the Revolution, which lifted him, as it did so many other creative dispositions with its false glow and bedazzling of the eyes, he abandoned this landmark and from that point in time began his wanderings.

In early 1919 he moved to Vilna and continued his pedagogical training. In the monthly Di naye velt (The new world) (Vilna) 1 and 2 (1919), he published fragments of the poem “Di shtot” (The city)—published in full in Vayter-bukh (Volume for A. Vayter) (Vilna: Br. Rozental, 1920). Kulbak’s first collection of poetry, entitled Shirim (Poems), appeared in 1920 (Vilna, 86 pp.). That fall he moved to Berlin, where at the time a center of Yiddish literature was springing into existence, and found himself in auspicious literary surroundings, becoming acquainted with Bal-Makhshoves, Dovid Bergelson, and Hersh Dovid Nomberg. He had intended to study in university there, but he was unable to do so because of insufficient knowledge of German. He lived in great want, supporting himself as a prompter for the Vilna troupe, which was then performing in the German capital. In Kulbak’s poems and a novel from this time, one can feel the expressionism that was dominating literature in Berlin. In the collection Der onheyb (The beginning) (Berlin: Vostok, 1922), he published a series of poems: “Di heyl” (The cave), “A levone-nakht” (The moonlit night), and “Asere dibres” (Ten is the Commandments). At that time, he published in New York’s Forverts (Forward) 4 (1923) the poem “Raysn” (Byelorussia). He also wrote the drama Yankev frank (Jacob Frank) at this time, which was published in Tsukunft (Future) in New York (April 1923). In a notice from editor Avrom Lyesin, among other things, he wrote: “Jacob Frank, Frankism, one of the wildest monsters in Jewish history, was perhaps a bit justly idealized by the poet, while the tragedy of the rabbis, those saintly men who devotedly fought against Frank, emerge vaguely. Is this a tribute to the time when this painful malice for Judaism in certain circles was all in fashion? So, such a genuine poet as Kulbak had to assign it to the poet oriented toward the Jewish Section in Moscow…. [But] the drama is an artistic work, in many places intuitively breaking the fast.” Kulbak also wrote his first novel, Meshiekh ben froym (The Messiah son of Ephraim) (1924) in Berlin, though it was published only after he had left the city. It was written in the spirit of modernism, in which realistic events are depicted in an expressionist fantasy and grotesque manner. The novel is permeated with Kabbala and Jewish mystical elements, and the heroes are both real people and heroes of Jewish folklore. In Berlin he also published Lider (Poetry) in 1922, mostly drawn from the Vilna collection Shirim. That same year there appeared in Warsaw his Naye lider (New poems), including the great poems: “Raysn,” “Lamed-vov” (Thirty-six), and “A lid tsu rusland” (A poem to Russia) in which he painted images of surrealistic horror. In Berlin he also turned to self-education, but his economic situation was in bad shape. He lamented this in letters to Shmuel Niger (dated December 17, 1920 and October 13, 1922).

In 1923 he returned to Vilna, where he worked again as a teacher of Yiddish literature at a Jewish high school and in the Jewish teachers’ seminary. He often spoke and read from his own work before Vilna youth who showed enthusiasm for him. With his pupils he directed and staged Perets’s Di goldene keyt, Homer’s Iliad, Aaron Wolfssohn’s Laykhtzin un fremelay (Frivolity and piety [original: Leichtsinn und Froemmelei]), the third act of Shakespeare’s Julius Caesar, and the Purim plays Dovid un golyes (David and Goliath) and Mekhires-yoysef (The selling of Joseph). In 1927 he was appointed chairman of the Yiddish PEN Club in Vilna. During his five years in Vilna (1923-1928), he composed: the work Vilne (Vilna) (Tsukunft, 1926); the poem Bunye un bere afn shlyakh (Bunye and Bere on the road) (Tsukunft, 1927) which, as Shmuel Niger noted, resounds echoing Aleksandr Blok’s Dvenadtsat (The twelve); and the novel Montog (Monday). In September 1928 he published the story “Munye der foygl-hendler” (Munye, the bird dealer) in Yidishe velt (Jewish world) (Warsaw). He also published articles in Vilner tog (Vilna day). Kletskin Publishers in Vilna brought his writings in three volumes (1926-1927). But the false glow coming from the East further bedazzled his eyes, and ten years after his first settling in Minsk, he returned there in October 1928 permanently. At a musical evening in the Warsaw Jewish literary association, he declared that he was going to Russia, because he no longer enjoyed the literary atmosphere in Poland. Avrom Golomb wrote that the reason was Kulbak’s desire to join his family in Russia.

Paradoxically, the last decade of his life (1928 to 1937) may actually have been the happiest in this writer’s creative life. One after the next, he published new books: novels, stories, and mainly poetry. A collection of his earlier poems appeared in 1929 (see below). In 1933 he published the autobiographical poem about his life in Germany: Disner tsayld harold (Childe Harold from Disna). Over the years 1931-1935, he published his long novel in two volumes Zelmenyaner (The Zelmenyans), an epical work about the fate of a Jewish family in Minsk and the conditions in the new Soviet lifestyle. Another volume of his poetry appeared in 1934 in Minsk. Then, in 1935 he brought out the play Boytre (Boytre), which was staged in all the Yiddish state theaters throughout the Soviet Union over the years 1936-1937, published in Shtern (Star) (Minsk) 7, 9, and 11 (1936), later reissued from a manuscript in Di goldene keyt (Tel Aviv) in 1957, and later still in Sovetish heymland (Soviet homeland) 3 (1966). He also wrote in 1936 Benyomen magidov (Benyomen Magidov), which was rehearsed in a series of theaters in 1937, but it was not staged. The manuscript has not as yet been uncovered. The director and actor Moyshe Goldblat, who was preparing to direct the play, recounts that in the drama there is a young Jew at the head of a partisan group who were fighting the Polish Legions in Byelorussia. Goldblat deems it “the acme of Moyshe Kulbak’s dramatic works.” Amid the zeal of rehearsals, however, Kulbak was arrested and the text of the play confiscated.

We have long known nothing of Kulbak’s fate following his arrest, and all manner of rumor and legend spread concerning his death, with false information continually being given to his family by the juridical authorities. Finally in 1990, the military tribunal of the supreme court of the Soviet Union allowed an open explanation to be made that the military tribunal of the supreme court of Byelorussia had sentenced Kulbak to be shot on October 28, 1937, because he was allegedly a participant in an anti-Soviet organization and an agent of Polish intelligence. The sentence was carried out on October 29, 1937. As for where his remains were buried, to this day no information has been made known.

As Shmuel Niger wrote: “Moyshe Kulbak was one of the most authentic and original, perhaps the most authentic and original, Yiddish poet of the postwar years…. Future music often played on ancient instruments; revolutionary myth kneaded into mythological tradition—this was one of Moyshe Kulbak’s main properties, and its first consequence was the uniting of the romantic with the realistic…and its second result was the explosion of the innovative use of humor in romantic realism.” Moyshe Kulbak was frequently criticized in Soviet Russia. Khatskl Dunets wrote that Kulbak came “here” loaded with “a heritage that was not ours,” that he created his intellectual culture “from Kabbalistic Jewish philosophy, Jewish mysticism, and scholasticism. Even in those of his works in which there is no messianism (Raysn), he was not free of bourgeois romanticism, and in Bunye un bere he articulates an anarchist-pessimistic attitude toward the revolution…. His Zelmenyaner sets out a crisis and a competition to free himself from the bourgeois mystical heritage—but he succeeds not at all.” Yashe Bronshteyn writes that, although from Montog until Zelmenyaner “is quite a distance, Kulbak nonetheless offers a “splendid beginning of a new style.” Kulbak was laden with the old Jewish cultural heritage. Mysticism and folklore were important elements in his writings. He was influenced by* Russian symbolism and Western European expressionism. Permeated by all these elements, Kulbak created authentic works with his own original talent. In his Soviet period (1928-1937), he had to conform to local conditions, but he also created works of artistry.

[1] Translator’s note: This novel has been translated into Hebrew, English, Russian, French, German, and Spanish. (JAF) 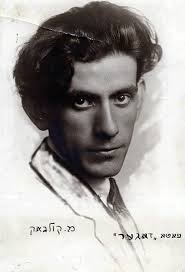