GERSHON PLUDERMAKHER (October 15, 1876-November 13, 1942)
He was born in Vilna, Lithuania, into a family of a schoolteacher.  Until age fourteen he studied in his father’s religious elementary school, later graduating from a Russian state public school.  For several years he studied in the Vilna teachers’ institute, but he did not graduate, for he was arrested in 1897 at an illegal workers’ meeting at which time they staged for the first time Gerhart Hauptmann’s play Di veber (The weavers [original: Die Weber]) in Yiddish.  In 1918 as a free auditor at the same institute, he received his teaching degree and from that point he was involved in teaching.  At the same time he was active in the Bund.  He was arrested several times, and after a longer stretch he was exiled to Siberia; from there in early 1906 he returned to Vilna.  He was active in Vilna, Bialystok, and other places.  From 1907 he devoted himself thoroughly to teaching, initially in Vilna evening school and later in other Jewish schools and public high schools in Vilna.  In 1907 he was a delegate to the first Jewish teachers’ conference, which proclaimed Yiddish as the language of instruction in the Jewish school.  In 1909 and 1910 he was placed under Tsarist police supervision, and in 1911 he again became active in pedagogical and community work.  From 1912 he was member of the Vilna “Khevre mefitse haskole” (Society for the promotion of enlightenment [among the Jews of Russia]), and at his initiative at its 1912 meeting in St. Petersburg, a resolution on schools in Yiddish was adopted.  He organized the first Yiddish pedagogical courses in Poland.  He was one of the initiators of the first school conference in 1921.  He was a cofounder of Tsisho (Central Jewish School Organization) and a member of its central administration, as well as of YIVO and Tsebak (Tsentraler bildungs komitet, or Central Educational Committee) and the latter’s vice-president.  He participated in the international conference of public schools and education (Paris, 1937).  He began writing activities in illegal Bundist publications in Russia in 1903 under the name Moyshe Gershenovitsh.  He was among the contributors to Vilna’s Folkstsaytung (People’s newspaper) (1903-1906) and Der veker (The alarm) (1907), among others.  He wrote articles on school issues, pedagogical problems, and general Jewish cultural affairs in: Vilner tog (Vilna day), Letste nayes (Latest news), Unzer gedank (Our idea), Di naye shul (The new school) (1919-1922), Shul fragn (School issues) (1931), and Shul-fraynd (School friend) (1936-1938) in Vilna; Fraye shriftn (Free writings) (1927-1937), Shul-vezn (School system), and Literarishe bleter (Literary leaves), among others in Warsaw.  He helped compile the reader Dos yidishe vort (The Yiddish word), edited by Moyshe Olgin (Vilna, 1919); and he edited L. Kh. Yofe’s textbook for the second and third school year: Der shul-khaver, a leze-bukh farn tsveytn un dritn shul-yor (The school buddy, a textbook for the second and third school year) (Vilna, 1914), and Shul-pinkes (School records) (Vilna, 1924), in which, among other items, he published “Tsu der geshikhte fun yidish-veltlekhn shul-vezn in vilne” (On the history of secular Yiddish school curriculum in Vilna).  In the last years of his life, he was employed compiling a textbook “Poetishe verk un historishe temes” (Poetic works and historical topics), of which only the first half was published: Yidishe geshikhte in literarishe mustern, heft 1, tekufe fun grikhish-sirisher hershaft (Jewish history in literary motifs, vol. 1, the era of the Syrian-Greek domination) (Vilna, 1940), 67 pp.  During the Soviet rule over Vilna in 1940, he worked as a teacher in the No. 2 Middle School, and later when the Nazis occupied Vilna, he lived in the ghetto and there he died. 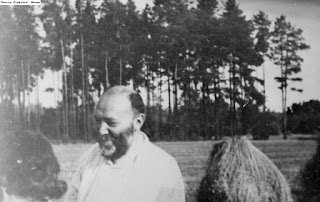