SHMUEL-AVROM POZNANSKI (SAMUEL ABRAHAM POZNAŃSKI) (October 13, 1864-December 5, 1921)
He was born in Lubraniec, near Włocławek, Poland.  He studied in Warsaw, Berlin, and Heidelberg where in 1895 he received his doctorate in philosophy for a work of research on Moshe Ibn Gikatila.  From 1897 he was the rabbi and preacher at Warsaw’s Great Synagogue.  He acquired great merit in the realm of Jewish studies in Poland.  He authored a number of scholar works in a variety of languages, primarily from the era of Geonim and on the Karaite movement.  In addition he published 784 articles in various encyclopedias and periodicals, including a small number in Hebrew in Hatsfira (The siren) (from 1889) and in Yiddish in Haynt (Today) and Dos idishe folk (The Jewish people) in Warsaw (1919, 1921).  He died in Warsaw. 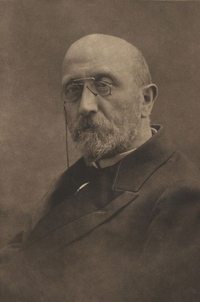