MIRL ERDBERG-SHATAN (April 15, 1894-1982)
She was born in Kutne (Kutno), Poland.  At three years of age, she immigrated with her parents to London, and there she attended a Rothschild school.  Later, her family moved back to Poland, and she attended a religious elementary school for girls in Kutno, before going on to study at various private schools, in the Lodz seminary “Lehishtalmut Hamorim” (Teacher training), and in 1920 at the teacher’s course at Tsisho (Central Jewish School Organization) in Warsaw.  For a time she worked as a teacher in the Kutno Jewish public school named for Y. L. Perets, as well as in a preschool and the first Hebrew high school of Kutno, before immigrating to Canada in 1926.  She debuted in print with poetry in the Warsaw journal Dos folk (The people), edited by Noyekh Prylucki and Sh. Stupnitski, in 1918.  From that point, she placed work in: Gezangen (Songs), Yudisher zhurnalist (Jewish journalist), and Yugend (Youth)—in Lodz; Ilustrirte vokh (Illustrated week), Yudishe zamlbikher (Jewish anthologies) edited by Vaysnberg, and Dos folk—in Warsaw; Keneder odler (Canadian eagle) in Montreal; Idisher zhurnal (Jewish journal) in Toronto; and Tsukunft (Future) and Unzer tsayt (Our time) in New York; among others.  Her poems were represented in Ezra Korman’s anthology Yidishe dikhterins (Jewish women poets) (Chicago, 1928).  She translated from Polish into Yiddish several short works by Przybyszewski.  She also rewrote into modern Yiddish the memoirs of Glikl of Hameln, published serially in Keneder odler.  In book form: Nit fun keyn freyd (Not out of joy), poetry (Montreal, 1950), 100 pp.  She died in Montreal. 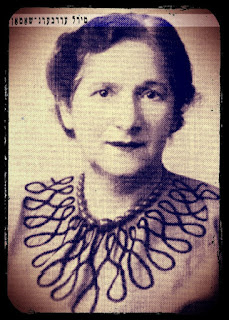