As he did not attempt to conform to the Party orientation, he did not avoid difficulties and fell a victim. Already in 1932 he confessed to deviations from the Party’s ideology. In a speech he gave at an official meeting of the Institute for Jewish Proletarian Culture in Kiev, he enumerated his sins, his Yiddishism, and his mechanical-empirical approach to literature, and as a result he was isolated not only for his Di geshikhte fun der yidisher literatur which was published in Poland, but for a number of works which had appeared in the Soviet Union. In 1933 there appeared in Poland a scholarly collection entitled Arkhiv far yidisher shprakhforshung (Archive for Yiddish language research), edited by Noyekh Prylucki and Sh. Lehman. In it appeared a work by Maks Erik on the memoires of Tosafot Yom-Tov following an old manuscript. Erik had prepared the text and delivered it to Prylucki in 1926. Erik published an explanation that he was distancing himself from the work and sharply criticized Prylucki for publishing it in 1933. In March 1936 when Pravda (Truth) in Moscow launched a fight “against formalism in literature and art,” Erik played his part in the campaign. Soon, though, the Stalinist knife was at Erik’s throat. On April 8, 1936, he published in Der shtern (The star) his review of Ziskind Lev’s volume of stories Fun velt tsu velt (From world to world) brought out by “Emes” (Truth) publishing house—it would be his last publication. Two days later, in the night of April 10-11, he was arrested. He was deported to a concentration camp, and there he died on October 16, 1937 in the Siberian city of Kirov. All of his essays, articles, and reviews have not as yet been assembled. 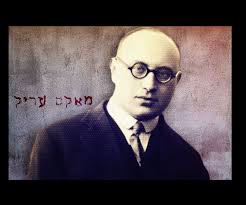