SHIYE PODRUZHNIK (August 10, 1894-December 31, 1962)
He was born in Tshekhanov (Ciechanów), Poland.  He studied Jewish subject matter with his father.  At age thirteen he settled in Antwerp and graduated from middle school there.  His journalistic activities began at sixteen as a correspondent for Fraynd (Friend).  He contributed to Avrom Reyzen’s periodical Nayer zhurnal (New journal) and the Vilna-based Yidishe velt (Jewish world) in 1913.  He co-edited the journal Der yidisher student (The Jewish student).  Together with M. Lipson and Yankev Klepfish, he published the first Yiddish periodical in Belgium, Der mayrev (The West), four issues (1913).  With the outbreak of WWI, he spent one year in London and from there wrote pieces for: Tog (Day), Tsukunft (Future), and Vayhayt (Truth) in New York, in which he published a lengthy work entitled “A tog-bukh fun der milkhome” (A diary from the war).  He also published feature pieces in Groyser kundes (Great prankster).  He joined the Jewish Legion, which helped liberated the land of Israel from the Turkish regime, and after the war he returned to London.  He wrote for a time for Di tsayt (The times) and Renesans (Renaissance), edited by Leo Kenig.  In 1920 he withdrew from professional journalism and founded an office for newspaper clippings.  He wrote from time to time and was a frequent contributor to Dos vort (The word), 1935-1937, in Warsaw.  He translated into Yiddish: Anatole France, Di royte lilye, roman (The red lily, a novel [original: Lys rouge]) (New York: Yidish, 1918), 331 pp.  In pamphlet form, he published: Dov ber borokhov (Dov Ber Borokhov) (London, 1947), 16 pp.  Under the name Y. Podro, he published in English: Nuremberg: The Unholy City (London: Anscombe, 1937), 127 pp.; and The Last Pharisee: The Life and Times of Rabbi Joshua Ben Hananya, a First-Century Idealist (London: Vallentine, Mitchell, 1959), 128 pp.  Together with the English poet Robert Graves, he wrote: The Nazarene Gospel Restored (London: Cassell, 1953), 1021 pp.  He died in London. 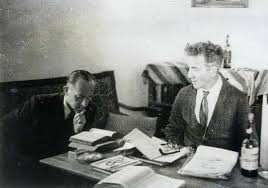 On the left with Robert Graves