LOUIS B. BOUDIN (February 15, 1874-May 29, 1952)
Foreshortened name of L. Budyanov (Boudianoff), he was born in a village in the Kanyev region, Kiev district.  He came to the United States in 1891.  In 1898 he completed his studies to be a lawyer.  From 1897 he was participating in the Jewish socialist press, mainly with Tsukunft (Future), Arbeter-tsaytung (Workers’ newspaper), Naye tsayt (New times), Progres (Progress), Nayer gayst (New spirit), Sotsyal-demokrat (Social democrat), Forverts (Forward), and Di naye velt (The new world).  He published political-economic treatises and was a pioneer in Marxist literary criticism.  He wrote also for English- and German-language newspapers, and he published works in English on Marxism and constitutional rights.  Over the years 1910-1912, he was on the editorial board of Tsukunft.  From 1917 he was a leftist socialist, and then in 1919 he left the Socialist Party.  He is considered a major expert on parliamentary rights.  He primarily defended unions and all manner of other laborers’ organizations and their leaders.  For twenty-four years he was tied to the American “ORT” (Association for the Promotion of Skilled Trades), and over the years 1933-1948 he was chairman of the managing committee of “ORT.”  Among his books: The Theoretical System of Karl Marx in the Light of Recent Criticism (Chicago: Charles H. Kerr, 1907), 286 pp., which was translated into German and Russian; and Government by Judiciary (New York: W. Godwin, Inc., 1932), 2 vols. 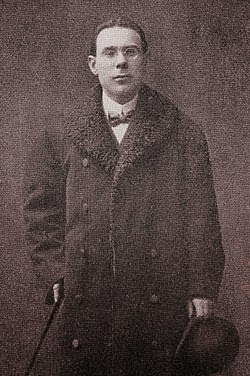