MEYER SHVARTS (April 26, 1889-March 27, 1971)
He was the author of plays and sketches, born in Slonim, Poland.  He moved with his family to Bialystok.  He attended religious elementary school and graduated from municipal school.  In 1903 he came to the United States.  He did a variety of jobs, finally working as a prompter in a Yiddish theater.  From 1913 he spent eight years in Europe, putting together theatrical troupes and often performing himself in a number of different cities.  In 1921 he made his way back to America.  He wrote sketches for Yiddish Vaudeville houses and two dozen plays for the Yiddish stage, almost all of which were performed: Kinder fun der ist sayd (Children of the East Side, later named Gasn fun nyu-york [Streets of New York]), Di familye frumkin (The family Frumkin), Di ende (The end), and Der toes (The mistake)—all 1911; Tsurik tsum lebn (Back to life) in 1913; Der shreklekher emes (The frightening truth) in 1921; Lokshn (Noodles) in 1922, a parody of Nikolai Gogol’s Revizor (The inspector general), later named Milyonen (Millions); A shpil mit fayer (A play with fire), renamed in 1924 Khosn af shpas (Groom as a joke); Mamele (Mama) in 1926, which played through the United States, Europe, and Argentina, and in 1939 was produced as a motion picture; Der goldener shidekh (The golden match) of 1926, later named Man un vayb (Man and wife); Der kenig fun gemblers (The king of gamblers) of 1928; Di groyse shvester (The big sister) of 1929, also known as Shvester-libe (Sisters’ love); Di yidishe shtunde (The Jewish hour) of 1929, also known as Amerikaner libe (American love); Dem tatns tekhterl (Daddy’s little daughter) of 1930, also called Der kleyner mazik (The little urchin); Unter eyn dakh (Under one roof) of 1932; Afn mizrekh-front (On the eastern front) of 1932, also called Di kleyte soykherte (The little businesswoman); Milkhome-volkns (Clouds of war) of 1938; and Der ershter shney (The first snow) of 1942.  Plays that were not staged: Di drite person (The third person); Ire beste yorn (Her best years); and Shvarts af vays (Black on white); among others.  From 1943 he was engaged in business and ceased writing.  In manuscript he left: Khurbn byalistok (The Holocaust in Bialystok).  He died in New York. 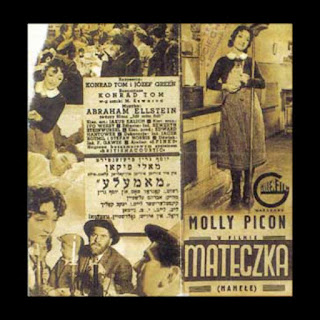