MORITZ STEINSCHNEIDER (March 30, 1816-January 24, 1907)
He was the greatest of Hebrew bibliographers.  His Jewish given name was Moshe.  Although his attitude toward “zhargon” [Yiddish] was one of enmity and contempt, nonetheless his bibliographic work with Yiddish literature was such that a Yiddish bibliographer or philologist cannot do without it.  He described 385 published Yiddish books before 1740 (in Serapeum [1848-1849]).  Fifteen years later he provided a description of sixty-four manuscripts in Yiddish (Serapeum 1-12 [1866]); and he wrote about the Mayse-bukh (Story book), about the old Germanicized Yiddish translations of the Pentateuch and Yiddish translations of Tanakh generally; and a series of articles on Yiddish religious texts, thirty-one publications of Purim plays, and the like.  He died in Berlin. 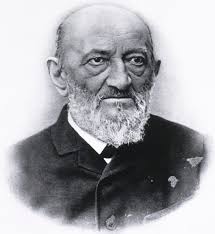