YITSKHOK FRIDMAN (November 11, 1893-July 28, 1950)
He was born in Libevne (Liuboml), Poland [now, Ukraine].  In 1903 he joined his father in the United States in the city of Newark.  During WWI he spent a year at the French front.  He returned wounded.  In 1929 he staged at the Roland Theater in Brownsville his comedic drama Itsikl ganef (Isaac the thief), a musical comedy in three acts; and in 1931 his melodrama Libe af oystsoln (Love on the installment plan).  In 1932 he produced at the Hopkinson Theater Netsl vert a khosn (Netsl becomes a bridegroom), written with Y. Rozenberg, and he went on later to perform around the world.  He was the author of a number of other plays that were staged.  In 1930 he published in Forverts (Forward) in New York his war experiences under the title “A yor tsvishn lebn un toyt” (A year between life and death).  It was published in book form under the same title (New York, 1932), 286 pp.—and it went through a number of printings.  He died in New York. 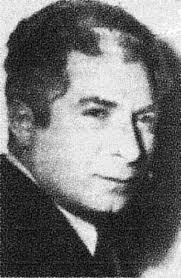