LOUIS FREYMAN (FREIMAN) (1892-January 30, 1967)
The pen name of Leyzer Genyuk, he was born in Ostropolye (Ostropol’), Volhynia, Russian empire.  In 1907 he moved to the United States and until 1911 lived in St. Louis, doing a variety of different jobs.  He was a cofounder of a theater circle, and he wrote and staged with this group his first works: Der royter shabes (The red Sabbath), among others.  As a writer he debuted in print with skits and stories in Di idishe prese (The Yiddish press) in St. Louis (1910).  He went on to place work in Shikager kuryer (Chicago courier) and elsewhere.  From 1919 he was thoroughly devoting his attention to the stage.  He was the author of some 100 plays, dramas and comedies, which were performed on the Yiddish stage throughout the world.  In book form, only the following appeared in print: Tsipke fayer (Tsipke fiery), a melodrama in four acts, published anonymously (Warsaw, 1925), 53 pp.; and Der blinder moler (The blind painter), a melodrama in three acts, with an epilogue (Warsaw, 1927), 64 pp.  His plays were performed in Yiddish theaters across the globe: Warsaw, Paris, New York, Buenos Aires, and elsewhere).  He died in New York. 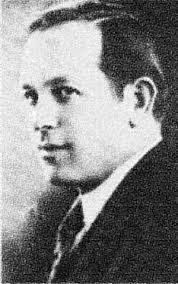