TUVYE FRIDMAN (TUVIAH FRIEDMAN) (b. January 23, 1922-January 13, 2011)
He was born in Rodem (Radom), Poland.  In the 1940s he lived under the German occupation.  He was in concentration camps until 1944.  He fled and until 1945 was an active fighter against the Nazis in the woods around Belzhets (Bełżec).  He later became consumed with tracking down Nazi war criminals and murderers of Jews.  He was the leader of the documentation center in Vienna (1946-1952).  He unmasked disguised Nazis from Hitler’s elite in various countries.  He earned great merit for seizing Adolf Eichmann and bringing him to Israel to stand trial.  He was the author of work in the realm of Nazi extermination and documentation in Polish.  He also contributed to Letste nayes (Latest news), Omer (Speech), and other serials in Tel Aviv.  Fridman’s English-language book, The Hunter (London, 1961), 299 pp., trans. David C. Gross, was a translation of the Yiddish original.  He died in Haifa. 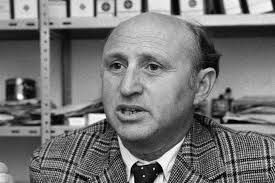