MOYSHE FROSTIG (November 6, 1887-February 14, 1928)
He was born in Zlotshev (Złoczów), eastern Galicia.  He studied in religious elementary school.  He later attended a Polish high school in Lemberg and graduated from the law faculty of Lemberg University.  His journalistic work began in 1905 in Zionist organs (in Polish) and in Lemberg’s Togblat (Daily newspaper).  In 1909 he became editor-in-chief of Togblat until it ceased publication in 1926.  Over the years 1909-1913, he also published scholarly literary yearbooks under the title Yudisher kalendar (Jewish calendar)—a kind of sequel to G. Bader’s Folks-kalendar (People’s calendar).  After the revival of the Lemberg daily Der morgn (The morning), he served as chief editor of it.  With numerous journalistic articles and notices, he contributed as well to other Zionist organs in Poland and Galicia.  From 1913 he was the Galician correspondent for Varhayt (Truth), later for Tog (Day) in New York, and later still for Morgn-zhurnal (Morning journal) in New York.  He published a series of pamphlets, such as: Di idishe ekonomik un der tsienizmus (The Jewish economy and Zionism); Di shenker-frage in galitsyen, a kurtse belehrung far di yudishe shenker in galitsyen (The issue of saloon-keepers in Galicia, a short explanation of Jewish saloon-keepers in Galicia) (Lemberg, 1909), 23 pp.; and Iber dem poyle-tsienizmus (On Labor Zionism).  In his booklet Di folks tsehlung un ir bedaytung far yudn (The people’s wealth and its significance for Jews) (Lemberg, 1910), 61 pp.—the third edition was published in 20,000-30,000 copies—he came out on behalf of Yiddish.  In 1922 he was elected to the Polish Sejm and was among the most active members of Kolo, the Jewish club of deputies and senators in the Sejm, especially in the field of economics.  As a journalist and community leader, he played a major role in forming the Jewish political and Zionist stance for Galician Jewry.  As Galicia became part of independent Poland after WWI, the influence of Lemberg as a press center dropped off markedly.  Using the pseudonym Morfa, he also published hectographically a drama in Polish under the title Powrót (Return).  He died in San Remo from a lung ailment. 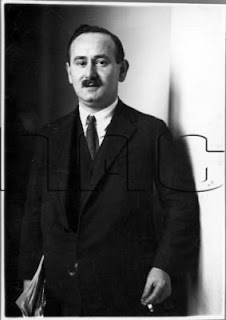