MAKS (MAX) FEDERMAN (September 18, 1902-August 8, 1991)
He was born in Khmelnik (Chmielnik), Kielce district, Poland.  At age seven he came with his parents to Toronto, Canada, and there he received his education.  For many years he led the Fur Workers’ Union in Toronto.  He was a member of the central committee of Labor Zionist-Labor Unity for Canada and North America and served as its representative in the Jewish Labor Committee, the Canadian Jewish Congress, and fundraising actions of the federation of labor.  He visited the state of Israel several times.  From 1940 he contributed articles on Jewish, general and laboring, lives to Proletarisher gedank (Proletarian idea), Unzer veg (Our way), and other publications of the left Labor Zionists in America.  He was a regular contributor to Der idisher zhurnal (The Jewish journal) in Toronto.  He was in charge of a column there entitled “In der arbeter-bavegung” (In the labor movement).  He was last living in Toronto, Canada. 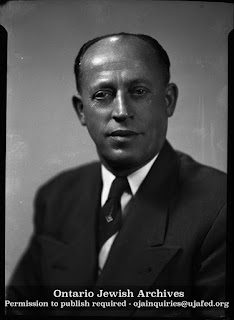