YULI MARGOLIN (1900-1970/1971)
He was born in Ekaterinoslav, Ukraine, the son of a medical doctor.  In his youth he moved to Pinsk.  He received both a Jewish and a general education.  In 1928 he graduated from the University of Berlin with a doctor of philosophy degree.  He lived thereafter in Lodz, where he was active in the Revisionist Zionist Party, YIVO, ORT (Association for the Promotion of Skilled Trades), and other organizations.  From 1936 until the summer of 1939, he was living in the land of Israel, before returning to Lodz.  When the Germans occupied Poland, he left for Pinsk, and from there the Bolsheviks deported him in late 1940 to a forced labor camp.  Liberated in 1946, he made his way through Poland to Israel.  He was a witness at the Kravchenko trial in Paris.  He began his writing career in Russian with a work on Pushkin (1929), which he later translated himself into Polish, German, and French.  From 1930 he published in Yiddish and Hebrew as well.  He contributed work to Lodzer literarishe bleter (Lodz literary leaves) and Os (Letter) in Warsaw, as well as in the Revisionist periodical press in various languages and countries.  He authored books in Yiddish, Russian, Hebrew, Polish, French, and German, among them: a work in Polish on Zionism (1937); Der oyfboy fun a kinstlerish verk (The construction of a work of art) (Lodz, 1938), 107 pp.; lectures (in Hebrew) on Communism (Tel Aviv, 1953); Puteshestvie v stranu ze-ka (A voyage to the land of camps) (Tel Aviv, 1953), 414 pp., chapters from which in his own translation were published in Yiddish in a variety of newspapers throughout the world; Evreiskaia povest’ (A Jewish tale) (Tel Aviv, 1960), 216 pp.; Doroga na zapad (The path to the West); [and many more].  A portion of his Di gefunene (The discovered ones), in which he described the Soviet authorities in Pinsk (1939-1941), was included in Dos land in un arum undzer brentsh (The country in and around our branch), a publication of the Pinsk branch of the Workmen’s Circle (New York, 1948).  He died in Tel Aviv. 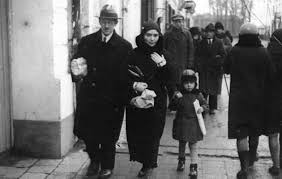 With his family before the war