YANKEV MARINOV (JACOB MARINOFF) (December 3, 1869-October 27, 1964)
He was born in Sernik (Serniki), near Pinsk, Polesia.  His father Meyer Morotshnik was a tailor, later becoming a miller.  His mother ran a dry-goods store.  He was the ninth in a family of thirteen children.  He studied in religious elementary school and with his father.  In his bar mitzvah year he became a blacksmith in the village of Nieczatów, near Stolin, and he would come home every Sabbath.  Meanwhile, his parents moved to Odessa, and when he once (in 1887) came home by raft, he found that his mother had died.  The sentimental young blacksmith took his mother’s death so strongly to heart that he became seriously ill, was no longer able to return to his smithy, and became a tailor.  So as not to have to become a soldier, in 1891 he fled to London, and there over the course of two years he worked in sweatshops, came into contact with laborers who had radical ideas, and under their influence became a socialist.  In 1893 Marinov arrived in New York and formed ties with Yoyel (Joel) Entin, Benyomen Faygenboym, Gershon Rozentsvayg, and other Jewish socialists.  In early 1894 he settled in Boston, where his father was living from earlier on, and there he began writing poetry.  His first poem—entitled “Mi vami haholekhim” (Who’s who that is going) [Exodus, 10:8]—was published in Emes (Truth) (July 12, 1895) in Boston, edited by Morris Winchevsky.  Due to his weak health, he traveled that same year to Denver, Colorado, where he supported himself as a blacksmith, and in his free time interacted with such writers as: Yehoash, Dr. Chaim Spivak, Dr. Adolf Tsederboym, N. M. Babad, S. Lopukhov, and Sharkanski.  Marinov was also active in the Socialist Labor Party, served for a time as its city organizer, and remained after the split in 1897 in the De Leon faction.  In those years he published poetry in: Arbayter tsaytung (Workers’ newspaper) and Forverts (Forward) in New York.  In 1908 he and Yehoash came to New York.  He published in Forverts stories as well, which he had translated from other literatures; he published in Tsukunft (Future) in New York; was an internal contributor to the daily newspaper Di idishe velt (The Jewish world) in New York, edited by M. Bukanski; and later he became the manager of the humor magazine Der groyser kibitzer (The great kibitzer), founded by Yoysef Tunkel, Yankev Adler, and Hirshl Hurvits in 1908.  Together with these same three colleagues, in 1909 he founded Der groyser kundes (The great prankster), for which he was initially manager and, after Yoysef Tunkel returned to Warsaw, he became editor of the magazine, a position he held for nineteen years.  Der groyser kundes—“a magazine of humor, jokes, and satire”—grew under Marinov’s editorship into an important literary and political weekly, which fought against hypocrisy in Jewish life in the United States—mainly against trash in the daily Yiddish press.  Under Marinov it also afforded him the opportunity to develop the genre of feature pieces by humorists who remained prominent in Yiddish literature and the Yiddish press, such as: Moyshe Nadir, Der Lebediker, A. Vohliner, B. Rivkin, A. Zeldin, Y. Adler, Khone Notesfeld, and others; and he brought up a large group of caricaturists, including: Lopa, Sh. Raskin, M. Laub, Zuni Moud, R. Lifshits, Art Yong, Ben Irov, and Yosl Kotler, among others.  He also attracted as contributor to Der groyser kundes such writers as: Sholem-Aleykhem, Yehoash, Avrom Reyzen, M. L. Halpern, A. Lutski, and others.  Through his magazine, Marinov carried out collections for the Jewish teachers’ seminary, the Sholem-Aleichem schools, for the Perets monument in Warsaw, support for Mendele Moykher-Sforim’s family, and other causes.  Together with A. Vohliner, he published the literary anthologies: Humor un satire (Humor and satire), vol. 1, “poetry” (New York, 1912), 360 pp.; vol. 2, “stories, sketches, and human-interest pieces” (New York, 1912), 331 pp.; vol. 3 “scholarship and popular humor” (New York, 1912), 300 pp.  He published his own poetry collection as well: Shpil un kamf (Play and fight) (New York, 1938), 303 pp.; Mir veln zayn (We shall survive) (New York, 1944), 62 pp.; Shtark un munter (Strong and cheerful) (New York, 1947), 62 pp.  He lived into old age at the Workmen’s Circle home in the Bronx and died there in New York. 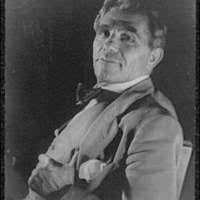