He was a teacher, current events writer, and community leader, born in Uman, Ukraine. He attended Kiev University and worked at the Ukrainian Scientific Institute for Pedagogy. At age fifteen he began his teaching work in village schools, later as a teacher in Uman, and later still as a school inspector in Uman. From 1920 to 1928, he was inspector for the Commissariat for Education in Kharkov. Over the years 1928-1932, he served as editor for the children’s newspaper Zay greyt (Get ready) in Kharkov and the journal Ratnbildung (Soviet education). He was head of the Party section for scholarship and higher education for the Kharkov region (1932-1934), and until 1937 he was head of the school administration and leader of the methodology section of the People’s Commissariat of Education in Ukraine. In 1937 he was purged and deported to a camp in Kazakhstan. After being freed, he spent the last years of his life in Siberia in the city of Rubtsovsk in the Altai region, where he was in charge of technical education in an Altai tractor factory. 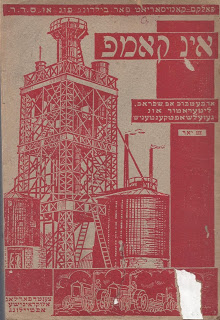