AVROM MOREVSKI (March 18, 1886-March 11, 1964)
The adopted name of the actor and writer Avrom Menaker, he was born in Vilna.  He came from a family of porgers (H. menakerim).  He studied in religious elementary schools, Tanakh and Hebrew with the well-known Vilna educator Dovid Notik, and Russian and secular subject matter with private tutors.  He was drawn when quite young to the theater, studied in the Odessa school, demonstrated great acting talents, and in 1905 began performing theater in Russian.  That year, he was compelled to return to Vilna because of the Odessa pogrom.  Over the years 1907-1910, he studied at the Suvorin Theater School in St. Petersburg, and in 1910 he graduated from the school with distinction; he went on to perform in Pavlovsk at the time of Nikolai II.  In 1918 he returned to Vilna.  Under the influence of the thriving Jewish cultural life of Vilna, he began to act on the stage in Yiddish at Lipovski’s “Folks-teater” (People’s theater), initially appearing in A. Vayter’s drama Der shtumer (The mute), and soon he acquired a great name as an actor and as a director.  His performances with the Vilna Troupe—in which, among other roles, he played the tsadek (saint) of Miropol in An-ski’s Der dibek (The dybbuk), his adaptations in Alter Kacyzne’s Der dukus (The count) and in Osip Dimov’s Shma yisroel (Hear, O Israel), as well as in Kayin (Cain), Hamlet (Hamlet), and other works—elevated the Yiddish theater in Poland, between the two world wars, to a very high level.  Morevski also began to write at an early age.  While he was still a student in the Odessa and St. Petersburg drama schools, he was already writing about theater, and later—together with his ascent as an actor—he grew as a writer as well.  He debuted in print in Yiddish with a polemic against Zalmen Reyzen in Vilna’s Letste nayes (Latest news), and from that point in time he frequently appeared in the Yiddish press and periodicals, such as: Frimorgn (Morning) in Riga; Di vokh (The week), Der tog (The day), and Lebn (Life) in Vilna; Der khoydesh (The month), Der fraynd (The friend), Unzer ekspres (Our express), Der moment (The moment), and Literarishe bleter (Literary leaves)—in Warsaw; Folksblat (People’s newspaper) and Tageblat (Daily newspaper)—in Lodz; Der tog in New York; Di prese (The press) and Idishe tsaytung (Jewish newspaper) in Buenos Aires.  He contributed as well to the anthologies: Ringen (Links), Vayter-bukh (Volume for Vayter), Tealit (Theater and literature), and Di bime (The stage), among other Yiddish-language publications around the world, in which he published articles and treatments of theater and literature, as well as contemporary cultural matters.
At the beginning of WWII, he was in Bialystok under Soviet control, and there he worked with the Yiddish state theater.  After Germany entered the war against Soviet Russia in 1941, he was evacuated with his theater to Central Asia.  When he returned to his hometown in 1945 after the destruction of Vilna and sought to appear on stage in a poetry recital in Yiddish, the Soviet authorities refused to give him permission, and he thus returned to Soviet Russia and acted there in Russian.  He also turned his attention to research on Shakespeare and gave lectures on the topic in Moscow academic circles.  After seventeen years absence, Morevski returned to Warsaw in 1956, and there he frequently wrote for Yiddish publications.  He also published articles in Di goldene keyt (The golden chain) in Tel Aviv and penned his memoirs.  At age forty (1928), he had written twenty-five installments of his memoirs for Di prese (August-September 1928).  In 1936 he published a volume entitled Kinder-yorn (Childhood years); and in 1956 “after seventeen years of Soviet reality” (preface), he again set to work writing those memoirs.  The result was: Ahin un tsurik, zikhroynes un rayoynes fun a yidn, an aktyor (To there and back, memoirs and thoughts of a Jew, an actor), 4 vols. (Warsaw, 1958–1963) (Warsaw: Yidbukh), vol. 1 (1958), 373 pp., vol. 2 (1959), 286 pp., vol. 3, covering the years 1910-1919 (1960), 528 pp., vol. 4 (1963), 410 pp.  From his earlier years, he published in book form: a translation into Yiddish in verse of Karl Gutzkow’s play, Uriel Acosta (Warsaw, 1921), 128 pp.; a translation of Leonid Andreev’s Der vos krigt di petsh (He who gets slapped [original Tot, kto poluchaet poshchechiny]) (Warsaw, 1921); and his own work Shaylok un shekspir, zibn kapitlen shekspirologye (Shylock and Shakespeare, seven chapters in Shakespeare studies) (Vilna, 1937), 95 pp.  He died in Warsaw. 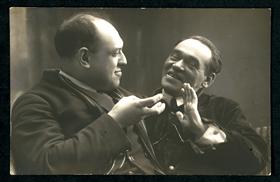 Morevski at left with unidentified actor