YITSKHOK LIKHTENSHTEYN (ISAAC LICHTENSTEIN) (December 23, 1888-1981)
He was born in Plonsk (Płońsk), Poland.  Until age seven he was raised in Warsaw; later, when his father received a position with Poznański, he lived with his parents in Lodz.  There he studied in a state public school.  He demonstrated talent for painting while still quite young, and in 1906 he began to attend the Cracow art academy, before going on to study painting in Rome, Florence, and Munich.  In 1908 he entered the Betsalel Art School in Jerusalem.  In 1910 he returned to Cracow, lived for a short time in Munich, 1911 in Paris, 1912-1913 again in the land of Israel, and in 1914 he returned to Paris, that very year setting off for the United States.  He lived in New York during WWI, where he became part of Jewish literary and artistic circles, and contributed as a graphic artist to a variety of Jewish publications, among them: M. Basin’s Antologye (Anthology), the collection Velt ayn, velt oys (World in, world out), and designed frontispieces, little vignettes, and letters for Yiddish-language books.  In 1916 he also began to write and published articles on the plastic arts in: Tsukunft (Future) in New York; the collection Shriften (Writings), vol. 6; Onheyb (Beginning), edited by Z. Vaynper; Morgn-zhurnal (Morning journal); Der amerikaner (The American); Forverts (Forward); and Di tsayt (The times).  He did journalistic work also for M. F. Seidman’s correspondence bureau in New York.  In 1918 he departed with the Jewish Legion for Israel.  In 1920 he came to London, was demobilized there, and was a contributor to the journal Renesans (Renaissance), edited by Leo Kenig, and to the daily newspaper Di tsayt, edited by Morris Meyer.  In 1924 he returned to Poland, exhibited his drawings in Warsaw, Lodz, Vilna, and other cities, gave speeches on art (general and Jewish), and published work in: Haynt (Today), Moment (Moment), Folkstsaytung (People’s newspaper), and Literarishe bleter (Literary leaves)—in Warsaw; Unzer lebn (Our life) in Grodno; Voliner lebn (Volhynia life); Nayer folksblat (New people’s newspaper) in Lodz; and elsewhere.  He also published impressions from his travels and memoirs of the Jewish Legion in Haynt.  In 1927 he founded with the Parisian publisher Triangle a series entitled “Yidn-kinstler, monografyes” (Jewish artists, monographs), for which he wrote: Mark shagal (Marc Chagall) (1927), 16 pp.; and Shmuel Hirshenberg (Samuel Hirszenberg) (1928), 19 pp.  Both of these monographs were translated into English and published in B’nai B’rith Magazine.  In 1938 he commenced a world exhibition in New York and there he remained.  In 1941 he revived in New York the art publisher Maḥmadim (founded in Paris in 1912), and it published: his art portfolio Yerushalayim (Jerusalem), 10 plates; Yankev Glatshteyn’s Yosl loksh fun khelem (Yosl Noodle from Chełm), with music by Henekh Kon and illustrations by Likhtenshetyn (1944); Geto-motivn (Ghetto motifs) by the artist Avrom Volkovitsh, with an appreciation of the artist by Likhtenshteyn (1946); the album, Kedoshim, lider far farpaynikte (Martyrs, songs for those who suffered), with Likhtenstein’s drawings and music by Henekh Kon (1947).  He served as director of the art center of the World Jewish Culture Congress in New York.  He arranged exhibitions of Jewish artists, ran series of art-evenings in the auditorium of the Jewish Museum, designed covers for Yiddish books, and contributed work to: Tsukunft (Future), Idisher kemfer (Jewish fighter), Legyonern-zhurnal (Legionnaire’s journal), Unzer tsayt (Our time), the anthology Vitebsk amol (Vitebsk in the past), and Almanakh yidish (Yiddish almanac), among other publications.  In 1960 he made a long trip to Europe and the state of Israel.  He was last living in New York. 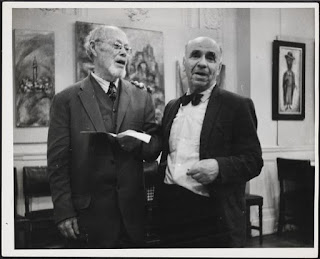 Likhtenshteyn on right (with Saul Raskin)